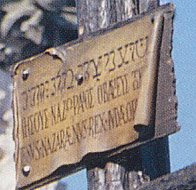 Mark 15:26
A sign was fastened to the cross, announcing the charge against him. It read, “The King of the Jews.” 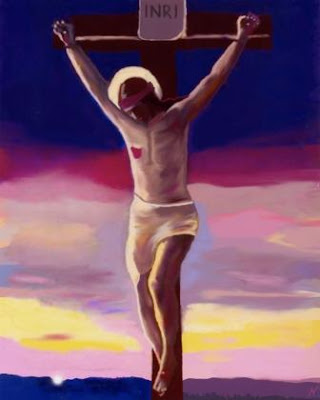 The Pharisees took issue with the sign, asking that Pilate change it to read, "He said I am the King of the Jews." Pilate was disgusted, I suspect, and probably thought he had spent enough time on these troublesome, stubborn Jewish authorities. "What I have written, I have written" he said tersely.

None of them understood how true it was that they named Jesus the King.

From I Timothy 6
Fight the good fight of faith. Hold tightly to the eternal life to which God has called you, which you have confessed so well before many witnesses. And I charge you before...Christ Jesus, who gave a good testimony before Pontius Pilate, that you obey this command without wavering...For at just the right time Christ will be revealed from heaven...King of all kings and Lord of all lords. He alone can never die, and he lives in light so brilliant that no human can approach him...All honor and power to him forever! Amen

King of all Kings,
We choose to acknowledge you now as King of Kings! This sounds grand and glorious, and it is, but we struggle in the day-to-day reality of obeying you and walking in your ways. We want to be your servants, but we like to be in charge too. Help us to wholeheartedly give you glory now, by our lives, our words, our actions, and not just wait for "someday." Amen

Posted by Dorcas (aka SingingOwl) at 8:34 PM

Yes Lord help us all. In these days that lead up to the resurrection, I am more and more reminded how imperfect I am in my ability to remain in total obedience. It makes my heart sad that I can't seem to get things right at times and even now I am hurt by the very thought of my shortcomings. I need you Lord.
(much2ponder)