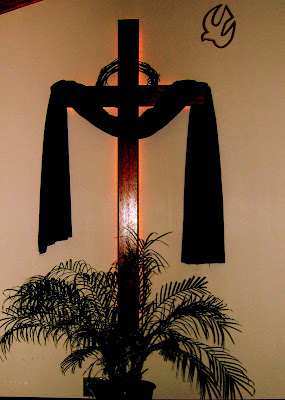 The Cross at Jubilee Assembly of God
From John 19
Jesus, knowing that all things were now accomplished, said, “I thirst!” They filled a sponge with sour wine, put it on hyssop, and put it to His mouth. So when Jesus had received the sour wine, He said, “It is finished!” And bowing His head, He gave up His spirit.
Therefore, because it was the Preparation Day, that the bodies should not remain on the cross on the Sabbath (for that Sabbath was a high day), the Jews asked Pilate that their legs might be broken, and that they might be taken away. Then the soldiers came and broke the legs of the first and of the other who was crucified with Him. But when they came to Jesus and saw that He was already dead, they did not break His legs. But one of the soldiers pierced His side with a spear, and immediately blood and water came out.
And he who has seen has testified, and his testimony is true; and he knows that he is telling the truth, so that you may believe. For these things were done that the Scripture should be fulfilled, “Not one of His bones shall be broken.” And again another Scripture says, “They shall look on Him whom they pierced.”

After this, Joseph of Arimathea, being a disciple of Jesus, but secretly, for fear of the Jews, asked Pilate that he might take away the body of Jesus; and Pilate gave him permission. So he came and took the body of Jesus. And Nicodemus, who at first came to Jesus by night, also came, bringing a mixture of myrrh and aloes, about a hundred pounds. Then they took the body of Jesus, and bound it in strips of linen with the spices, as the custom of the Jews is to bury. Now in the place where He was crucified there was a garden, and in the garden a new tomb in which no one had yet been laid. So there they laid Jesus, because of the Jews’ Preparation Day, for the tomb was nearby.


Thank you Reverend Mommy, for this beautiful poem.

Last night we shared candlelight communion together at our little church. Tonight, along with eleven other women I will be part of a drama at Saints Peter and Paul Catholic Church, three miles away. I pray each of you has a "Good Friday" that is indeed good--good with an awareness of what Jesus has done because of love. As we enter into a time of waiting, may our identification with him in the hour of suffering and death make our coming celebrations all the more beautiful and joyous.
Posted by Dorcas (aka SingingOwl) at 10:42 PM