Thank you so much to all who told me, one way or another, of your thoughts and prayers and well-wishes. They truly did warm my heart.

The Washington weather was wonderful. After days of sub-zero temps, 45 degrees feels warm! In Seattle the grass is green and even though the trees are bare there are buds on flower bushes. Approaching the Seattle/Tacoma airport is interesting, because the flight is over some of the glorious Cascade Mountains, and at this time of year their craggy peaks are snow-covered and magnificent. Then comes Puget Sound and the beautiful water, and then the green of Seattle, a classy city. 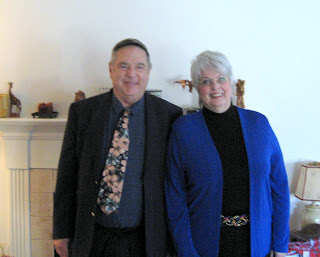 My brother in law, Larry, pictured here with me on the day of the memorial service, picked me up, along with my nephew's wife, Jessica. You see Jessica, my nephew, Grady, and me, below. 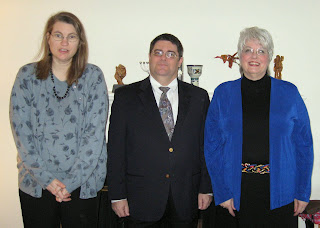 I thought it would be difficult to arrive at my sister's home, but I wasn't sad. I wasn't much of anything. I just--was. What a disconcerting feeling that was--feeling nothing much at all. I know it was a defense of my mind and emotions, and it worked, but I didn't much like it because it felt like I didn't care. I've never experienced anything quite like it before. That feeling, or lack thereof, did wear off, but it took a couple of days.

Later, Adryenne (Grady and Jessica's 18 year old daughter) came over and we all drove to the cemetery where Darlaine's ashes will be placed. It is a beautiful site. Here is the view looking towards the exit. I know Darlaine probably has much more wondrous vistas to admire, but I liked that Mt. Rainier is sort of watching over the place where her earthly remains will be. Like me, Darlaine loved the mountains. 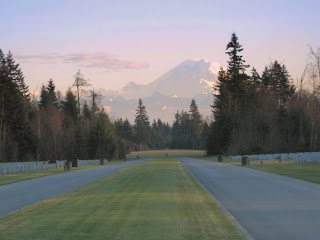 Later, family arrived. Larry's son Dan and his French Canadian wife, Sylvie, Larry and Darlaine's daughters Shantell, and Franchesska (Frankie), Frankie's husband Matt and their two children. Others came the day of the service, and afterwards Larry's little place was packed with family.

The weather continued to be beautiful for the entire time I was there. The day of the service was no exception, and the sunshine buoyed our spirits. The chapel was full of people, and that made us all glad. The service was truly a celebration, and many people shared how Darlaine had ncouraged them in their faith and blessed their lives in various ways. The time at Larry's place with family after the reception was enjoyable as well. After many years of hearing about them, I met Larry's brother, Tony, and Tony's wife, Marie. There was other family there too, nearly 20 of us. We laughed and talked and enjoyed one another. (Hallelujah!) God was with us.

It was a little hard to leave. I don't know if I will ever visit there again, and good-byes are difficult. The flight was long but uneventful till icy rain caused delay at one of the connecting airports. It ended up that I missed the plane to Milwaukee. However, even that wasn't all bad, because I was in Minneapolis. So my son-in-law, Daryl, picked me up and I spent the night on the couch. Next morning I ate breakfast with Kris and the beautiful and charming Trinity Ann before dashing off to the airport for the final stretch.

I did well during the trip, but did not sleep much for about four nights, and when I finally arrived home yesterday afternoon I crashed. I emptied my suitcase and dropped into bed and slept for hours.....uh oh. I thought that would mean I wouldn't sleep last night, but I did.

This morning I am looking out on deep snow. The roads are icy. The sun is shining but it is cold. My car won't start--again! I think a new battery is in order. For now, I have a charger on it, and I'm waiting. I have lots to do, so it won't be so bad if I'm unable to get to the office. Sermon notes are here, and laundry, and....home again, home again.

Once again, thanks to all who prayed and wished me well.
Posted by Dorcas (aka SingingOwl) at 10:36 AM

Welcome home. I traveled between snow storms in and out of your area. Our family time was wonderful. 9 people staying at the house. I found it very emotional to be with people of four generations. The old ones are failing physically. The young ones are a source of hope and energy.

I was so glad to see you last night. I missed you. I hope life will begin to slow down as you gear up for your next adventure. I love you.

In the words of John Sebastian

Welcome back, your dreams were your ticket out.
Welcome back to that same old place that you laughed about.
Well the names have all changed since you hung around,
But those dreams have remained and they’re turned around.

Nightmare and Ruth, I'm in Minneapolis next week, so let's try again to get together. Ruth, I have your number in my cell phone, so I'll call you.

Oooh, I am SO JEALOUS of the three of you! How come it's so FAR from here to there????

Welcome home, dear sister. You remain in my prayers.

I should be around most of the week and weekend, I get off work by 6, sometimes earlier.