This is the second sermon in the OASIS series. 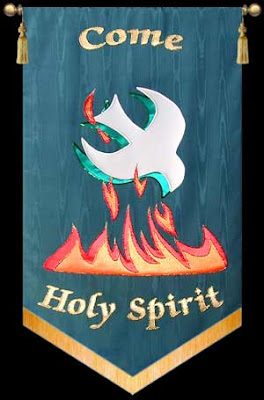 The letter A in OASIS reminds us that we will be people who seek to "advance God's kingdom."

Sounds good, and a bit churchy, doesn't it?
But what exactly is the “Kingdom of God?”Jesus speaks of it again and again in his parables and in the famous "Sermon on the Mount."
We must understand what Jesus means when he speaks of “the Kingdom” -- not merely because we look to it as a future reward (Heaven), but also because it affects how we live and think right now.
We prepare for the future kingdom by living in it today, obeying what our King teaches. As we live in faith, we recognize God’s rule in our own experiences in this world, and we continue to confidently hope for a future time when the kingdom will be filled to the full and "the earth will be full of the knowledge of the Lord.”
From Acts, Chapter 2:
When the day of Pentecost came, they were all together in one place. Suddenly a sound like the blowing of a violent wind came from heaven and filled the whole house where they were sitting. They saw what seemed to be tongues of fire that separated and came to rest on each of them. All of them were filled with the Holy Spirit and began to speak in other tongues [languages] as the Spirit enabled them.
Staying in Jerusalem were God-fearing Jews from many nations… When they heard this sound, a crowd came together in bewilderment, because each one heard their own language being spoken. Utterly amazed, they asked: "Aren't all these who are speaking Galileans? Then how is it that each of us hears them in our native language?...We all hear them declaring the wonders of God in our own tongues!" Amazed and perplexed, they asked one another, "What does this mean?"
Some, however, made fun of them and said, "They have had too much wine." Then Peter stood up…and addressed the crowd: "Fellow Jews and all of you who live in Jerusalem…listen carefully to what I say. These people are not drunk, as you suppose. It's only nine in the morning! No, this is what was spoken by the prophet Joel: " 'In the last days, God says, I will pour out my Spirit on all people. Your sons and daughters will prophesy, your young men will see visions, your old men will dream dreams. Even on my servants, both men and women, I will pour out my Spirit in those days, and they will prophesy…. And everyone who calls on the name of the Lord will be saved.'
The Gospels speak of the Kingdom 120 times, and it is mentioned almost 200 times in the New Testament. What is this “Kingdom?” Jesus speaks of so often?
The Kingdom is:

The sovereign, righteous rule of God. This Kingdom is unlike any other. Power and goodness, judgment and mercy are combined. Though the term arose when the nations were monarchies and the symbolism was more familiar, this was a kingdom very unlike the Romans. God is supreme over all creation, but God’s concern for every person is that of a loving Abba -- a father or even a dad.
Must be accepted in faithful, grateful obedience. There is no kingdom without subjects. The kingdom is not destroyed by human disobedience, for God still rules in judgment. But Jesus’ call to “seek first his kingdom and his righteousness” certainly calls for human obedience and hearts that will put the kingdom ahead of their own agendas.
A redeemed (rescued and bought back) people and a redeemed kind of society. I do not mean simply a reconstructed social order, though this certainly might be one of the results of a people who take a command to love God and each other seriously! The redeemed are those in whom salvation is sought and found. It is not a community of one, but it is an ever-growing community of individuals. This is basic to the relation of the kingdom to the church, but the Kingdom extends far beyond the boundaries of the visible church.
Opposed at many points! Kingdom citizens do not deny or minimize the power of evil. We can think of the opposition as coming from the devil, or from the demonic powers of history, or from humankind’s ever-present sin, ignorance, apathy, and error. The "principalities and powers" of Eph. 5 confront God’s power. These forces never conquer God, but what we believe to be his purposes may be delayed or frustrated by these things. Kingdom life is not necessarily going to be an easy life!
Present now, but pointing forward. When we pray the Lord's Prayer together we say, "Thy kingdom come; thy will be done. Though we seek evidences of its presence now, the fulfillment of the kingdom lies in the future. We may think of this future as eternal life, or a new heaven and a new earth for humanity, or as the conquest of evil in and beyond human history. A view of the kingdom of God is always looking ahead in hope.
But this is Pentecost Sunday. Why do we call ourselves " Pentecostal?" And what does all this Kingdom of God talk have to do with that anyway?
Yes, today is Pentecost Sunday, a day when the Church of Jesus Christ celebrates her birthday. According to scripture, Jesus told his followers to wait in Jerusalem. What were they waiting for? They weren't quite sure, but they did know it was some sort of promise that Jesus said would be sent from God. So, in obedience to Jesus' a band of believers gathered and prayed, and waited for the promised blessing to come. The established order was already changing. After all, women were present in the group, praying and waiting with the others.
Acts 1:8 tells us that one of the last things Jesus said before he left this earth was that his followers would receive power when the promised Holy Spirit came.
Power for what? Power to be witnesses! A witness is simply one who tells what he has seen, heard and experienced. They would, Jesus said, be his witnesses in Jerusalem, Judea, Samaria, and the ends of the earth. Power to be the people of God, the citizens of a new kind of Kingdom.
The Spirit, ruach in Hebrew and pneuma in Greek is the wind, or the breath. The sound of a violent wind filled the house as the Holy Spirit descended and the Church was born.
There are so many wonderful and descriptive metaphors and symbols to help us understand something of the nature of the Holy Spirit. Fire, oil, a dove, water (which we have been talking about a great deal) and wind.
The Wind of God!
The Kingdom of God is for faithful, grateful and obedient people--the redeemed people of God! It is for the warriors, not in any earthly sense but in a battle of cosmic proportions where God's will and reign is triumphant.
Without the promise of power which the Wind of God--the Holy Spirit--brings, these task are impossible. "Wait" Jesus said, "until you are filled with power from above."
The presence of God brings the power to advance God's Kingdom! Young and old, men and women, all kinds of people are called to join us. Whoever calls on the name of the Lord will be saved.
The Kingdom of God is at the center of all Jesus taught and lived. Now it is for us, the subjects, to discover the Kingdom, to declare the Kingdom and to live as empowered, Spirit-filled, citizens of this Kingdom.
Will you join me?
Posted by Dorcas (aka SingingOwl) at 12:27 PM

I like your sermon as well - I am sorry about your mom today - prayers for you and her...
hope it was a good nao and a good group time to refresh and care for yourself.

Great sermon..I was hoping you would mention the mustard seed, as that has always mystified me :)