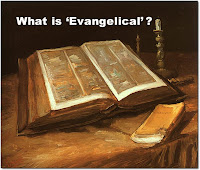 Proclaiming Softly, pointed her blog's readers here to an article regarding what is being called an "Evangelical Manifesto." It is due to be released in Washington DC tomorrow. I'm interested in the document, and found this quote regarding political agendas on the "right" or the "left" thought provoking:

...faith loses its independence, Christians become 'useful idiots' for one political party or another, and the Christian faith becomes an ideology."

I find that I am avoiding using the word "evangelical" in much the same way that I long ago discontinued speaking of myself as a "fundamentalist" even though by some definitions I would qualify. Though I know many of my friends would disagree, I feel there is just too much emotional, political, and ideological baggage attached these days for me to be comfortable using the word "evangelical." That is sad, I think. And it is why, even though I don't yet know the contents of the manifesto, that I can at least agree with the authors that the word has lost it's meaning.

I wait with interest to see the contents, and to see who does and does not sign it. Wonder why no one asked my opinion? :-)

This quote, "Phil Burress, an Ohio activist who networks with national evangelical leaders, said that if high-profile evangelical leaders such as Dobson and Land don't support the document, 'it's like throwing a pebble in the ocean' and will carry no weight" makes steam come out of my ears.

A friend of mine said it. I repeated it after this correspondence and I'll repeat it again, "Doctor Dobson is not the Protestant Pope."

What do you think? Has "evangelical" lost it's meaning?
Posted by Dorcas (aka SingingOwl) at 1:14 PM

As a member of a Christian denomination which proudly has the word "Evangelical" in its name, meaning the original, historical meaning of Evangelical, ie believing in the Word as shown in the four Gospels, I don't reject the word evangelical, but I've been dismayed at the way that word has become linked to certain Christian groups to the point where it sometimes takes on some rule-bound connotations that are less than loving.

And, yes, this is confusing to people. My son wanted to apply to a college that had the word evangelical in its name. We urged him to carefully check this out. Turns out that the college had more rules for students than Jesus has to get into heaven. The students couldn't walk on the grass or on the beach or even in certain area of town and they had to wear certain clothing.

I believe it has lost its "good" meaning. The word no longer conveys the thought of a Christian with a conservative walk in the Lord Jesus. Even among Christians I believe it is beginning to stand for a belief system with no power. This is all quite sad. I try to avoid the word.

Coming back to comment: I used to listen to Dr. Dobson when he stuck to family psychology topics, but he isn't a doctor and he isn't a Bible scholar, so I get kind of annoyed at why he is looked at as though he is either.

Yes, the word has changed considerably. As with "fundamentalist"--I often describe myself as four-fifths of a fundamentalist, in the original sense of the word.

Kievas, now you got me wondering which four fifths. LOL!

good thoughts. after you read through the document, post what you see as good and bad; i'm enjoying reading the various opinions here and there around the web.

one of the things i like is that the authors have chosen not to list creationism and inerrancy as non-negotiables. for the first, there's very little biblical justification anymore behind whatever the latest flavor of anti-natural-selection dessert is being served up; for the latter, somehow we can admit that we can't prove the existence of God, but goshdarnit we have a golden egg this unprovable God laid right here. still, some people hold to these positions; so be it. there's simply too much of a tendency to add items to the ever-increasing laundry list of ideas and doctrines to which we have to pledge allegiance before we're allowed into the room marked "Christian."

nothing's going to please everybody, and there are a few things i object to. for instance, i don't agree with this statement: We Evangelicals should be defined theologically, and not politically, socially, or culturally. Jesus' message uses "action" verbs: teach them to DO as I have commanded you, LOVE God and LOVE your neighbor, by this will all men know ... if you LOVE one another. any theology that defines us must have feet.

i did, however, like these words: We are also troubled by the fact that the advance of globalization and the emergence of a global public square finds no matching vision of how we are to live freely, justly, and peacefully with our deepest differences on the global stage. somehow, we've got to figure out how we're going to peacefully share the same bathroom over the next few decades in our ever-shrinking world.

more than anything, i find myself energized by the very positive nature of the piece - that it isn't yet another "here's everything we're against" rant but an effort to make the gospel again a message of good news. imagine that - the gospel being good news. American Christianity has lost this defining characteristic that once served it well.

perhaps one unintended benefit of the proposal is a clear opportunity to take this EM (Evangelical Manifesto) and align it with the other EM (Emergent Manifesto) and finally have all our EM & EMs in a row without demonizing the other side.

one can only hope...