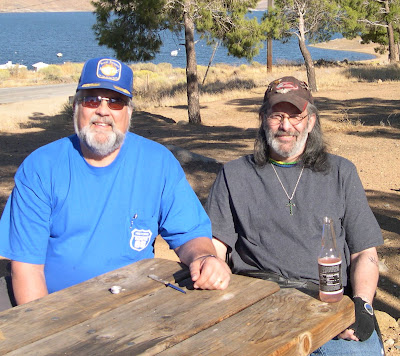 This is my husband, Ken (in blue), and his younger brother, Kevin. I took the picture two years ago at a picnic spot by California's Lake Isabella. Some of you who read this blog have known me for a long time, so you may remember the story of when Kevin, who we had not heard from in over 25 years, suddenly called us one night about ten years ago, I think. After a long conversation with Kevin, Ken and I cried, and we rejoiced, and we wondered, and we prayed, expressing surprise and gratitude to God that this brother who was lost had now been 'found."

Kevin was a handsome and sweet little boy who became a rebellious, drug-abusing teen. He lived with an older sister after Mom and Dad couldn't handle him anymore. And when his sister kicked him out of her house, he came to ours. There were good moments, but mostly it was not a pleasant time, and Kevin left with much anger and bitterness. Ken saw him once, several years later, at their sister's funeral, and then not again. Attempts to reconcile or even talk were fruitless. We eventually gave up--though we heard bits and pieces about him now and again. His life has been a rather tragic one, and eventually he ended up homeless for many years. He should never have survived, but (I think solely by God's grace) he did. We would have taken him in if he had been willing, but we never managed to contact him.

He is a diabetic, and after losing a leg, and suffering greatly, he gave his life to the keeping of God and he forgave us, and others. Thus, the phone call. We have been in touch, off and on, for several years now, and about four years ago he was able to come visit us. Two years ago we were finally able to visit him for a short time in California. Seeing him after all those years broke our hearts. What a change--he is frail and in almost constant pain, but he has once again become quite like the little boy we knew years ago. It is very strange. For quite some time he has been living in a situation I will not describe, and a few days ago he called to tell us he was at the end of his ability to survive without help. He will be coming here very soon to live with us. My mother's little "suite" will be Kevin's now, and we will see what comes. This will be challenging for all of us, but we never hesitated in asking him to come. I know this is a bit personal, but Kevin is not shy about sharing the story.

My mother is continuing to slowly deteriorate. I spent Mother's Day afternoon at the nursing home with her. It was very sad.

My brother in law is getting married! I wish I could meet his wife to be. I am happy for him, and he has been without his beloved Darlaine for a long time, considering the Alzheimer's. Somehow though, this sent me into a very sad place of missing my sister more than I have for a long time. It seems, perhaps, truly final now.

Since my "unresignation" things have been both very good and very bad at church. I am still waiting and praying to see what will come.

Ken is facing a physical problem which is potentially very serious, and it may require surgery. We will know more later this week.

I'm okay, and I'm looking forward to attending the Festival of Homiletics next week in Minneapolis. I will stay with the family, and I'll meet many of the Rev Gals and Pals, and I will hopefully return feeling like I will be a preaching dynamo. I'm still singing, which is always a good sign for me, but I'm feeling a bit topsy turvey, doncha know? ;-)

Life is so strange, sometimes.

So much sad news in personal life and in the world these days. I'm often feeling really blue. I'll be in your area in about 9 days. I'll email you, but again, won't be able to meet you.

GOOD GRIEF! It is getting uncanny how every time you are nearby, I am not! How many times does this make, for crying out loud?

Well, one of these days. I hope all goes well.

You are so in my prayers. I can share some things with you at the Festival, having been in the same situation as your brother-in-law.

I hope you enjoy your time away. *hug*

Here's hoping the transition to having your brother-in-law living with you goes as smoothly as possible and works out well for all concerned.

I've been thinking a lot about you -your career choice especially -as our church has offered the pastorate (Vacant since last September) to a young lady, just finishing up seminary and whose home state is Wisconsin! Our council voted to offer her the position about a month ago, this past Saturday we had a nice pot luck dinner so the parishioners would have a little opportunity to meet and greet her. Then, Sunday morning she did the service and sermon after which the congregation voted 79 ayes and 3 nays to ask her to become our pastor. She has requested some time to think and pray over her decision and will let the church know by this Friday the latest but I am very much hoping she will accept the charge and become our pastor. There is something about her that reminds me of you -even though we've never met -but I don't know if it is her "voice" (as I've heard your voice speak to me through your posts here) or if it is the sparkle in her eyes that says I really enjoy working with and for people and spreading God's word.

Ah, Jeni, how kind of you! Blessings on her, and your church, and the choices to be made.

Wow, Singing Owl! Prayers from here too ... that's just a lot to deal with. Hope Festival of Hommies is a nourishing time for you.

You do have a lot going on in your life! I'll be praying for you and your family.