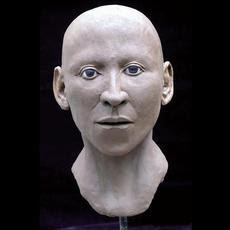 A nice cast of a kephale (head).

In Part One I included a little more of the passage, backing up to verse 21 and continuing on to verse 25 and using several Bible translations. If you have not read that post you might want to do so now. Or maybe you'll need a review. I did.

I'll wait right here for you. Here, once again, is the link.

From this rather simple passage and a couple of others have come a myriad of teachings that are extrapolated from the text. Here is a dictionary definition for extrapolate: To infer or estimate by extending or projecting known information.

It is sometimes necessary to extrapolate from a text. When we do so, wisdom and humility would say we'd best be careful to avoid dogmatic assumptions. To extrapolate is to infer. To infer is to derive by reasoning; conclude or judge from premises or evidence, to guess; speculate; surmise. One may believe that the Bible infers that the husband must be a servant leader, but that does not mean the Bible actually says this. Here is a different kind of statement, "The Bible says that we love God because He first loved us." I John 4:9 does indeed say just that. No inference.

I cannot think of any scripture that has more inferences made from it, nor more extrapolation presented as unquestionable fact than Eph. 5:23. (Except for verse 22--ack--I will not go there in this post.) Here are just a few things, some of which were in my previous "rant" or in previous posts in this series.

The husband is the head of the wife as Christ is of the church. Thus, the husband is prophet, priest and king of the home.

The husband is the "head," the "leader," or the "authority" of the home.

The husband must always lead his wife.

The wife must always graciously submit to the leadership of her husband.

There is a hierarchy of the home. God is the supreme head, and under God's leadership is the husband, then the wife, then the children.

The husband must exercise headship. [What does that word mean--and who gets to decide what it means? I'll bet it isn't the wife.]

The husband must exercise servant leadership.

Someone must be in authority in the home. God says that's the man.

The man should consider his wife's opinion, but he has final say.

God will hold the man responsible for his wife and family. (Partly true, but only partly.)

Other things not related to husbands and wives get extrapolated as well. I won't dwell on it, since it is another issue, but I will give one example of what I mean. Recently a well-meaning ministry colleague said, "I support women in ministry, you know. But I admit something seems wrong, and I would have a hard time submitting to a woman pastor. I mean, if the man is designed to lead the woman, how can we submit to a woman in the church? Why is it not right for the woman to lead the man at home but okay elsewhere?"

That is a pretty logical question, don't you think? I do. If you believe man is made to lead, it is a reasonable question indeed.

The New Testament was not written in English. What we have are various translations.
THUS IT IS CRITICALLY IMPORTANT THAT WE DO NOT IMPOSE MEANINGS THAT COME FROM ENGLISH USAGE.

If you have read these posts and wondered why I keep saying the man/husband does not always lead--if you have thought, "Why doesn't she get that the Bible says the husband is the head?" then read that capitalized part again.

In English the word head has a multitude of meanings. However, two are most common.

1. the round thing on top of the neck, or 2. the one in authority, the leader, the boss.

1. My head hurts. My head is too big for this hat. Low clearance--Watch you head.

But that is in English. What is the word in Greek? It is KEPHALE (English transliteration. I don't have Greek fonts so that will have to do.) The picture above is there to remind us that kephale is a literal head. Kephale is not the word Paul uses when he wants to say authority.

Some of us have heard, read, and been taught that the husband is the head so he is the leader for so long that it is very difficult to read that scripture passage any other way. I don't think I'm the only one who would struggle with this. So I have chosen a word that means a human head. Let's use noggin. I'm not trying to be silly. It is the best word I could come up with

So what did this word mean to the original readers (hearers)? While it is correct that there are some instances where kephale could mean authority, Paul never uses it this way.

Paul Burleson has an excellent post about this. I've linked to it because I recommend you read it all, but here is a paragraph.

"...Kephale" didn't have the normal meaning of "authority" in Paul's day and in the Greek language. Paul used other words for "authority."

Paul used "heart" for the intelligent control of the body which was the Greek way of thinking. There was... no knowledge of the "head" controlling as we know it today.

[If we were writing many of the scriptures below we would be more likely to say "mind" instead of heart.]

But the meaning of "source" was theirs, and were you to use that meaning where the word "kephale" is referenced you would see... scripture to be clear."

The Man is the Source of the Woman

The meaning of this passage has been distorted because of the assumption that kephale means "ruler," "leader," or "boss" in the same way that the English "head" can carry this figurative meaning. We now know that this assumption is wrong.

Unbiased research reveals that had Paul wanted to convey the idea of "authority," he would have chosen the word archon. This word, archon conveys the idea of authority, rulership, or leadership.

Kephale means "source." This is important because it teaches the Ephesians that women were created from the same substance as men. It refutes the pagan idea that women were made of an inferior substance between that of man and animal. Paul, therefore, undermines this pagan notion by referring to the man as the kephale ("source") of the woman in creation and exhorts husbands to love their wives as their own bodies (vs. 23). She is bone of his bone and flesh of his flesh, (Gen. 2:23)--a fitting and equal partner.

This rendering is neither bizarre nor fringe but is, in fact, confirmed by the best research in the field. For example, one of the most complete Greek lexicons, Liddell, Scott, Jones and McKenzie, list various meanings for kephale, but it does not list "authority over," "ruler," "boss" or anything similar as a definition.

Berkeley and Alvera Mickelsen, in their study of headship in the Septuagint discovered that when the word ro'sh ("head") was used figuratively to mean "source" or "beginning," the translators used kephale. However, when ro'sh was used figuratively to mean "ruler" or "boss" (e.g., the head of the tribe of Judah), the translators used archon meaning "ruler."

Many other Evangelical scholars, including F. F. Bruce, Catherine Kroeger, and David Scholer, concur. Some disagree, not because of lack of evidence, but because of a prior commitment to "male headship."

Let's look at one other passage where the husband is spoken of as the noggin (kephale) but let's use source. I Cor. 11:3, 11 and 12. The verses in between are a discussion of head coverings, and beyond the scope of this post.

These verses are not about hierarchy and who gets to be boss over who. Both the language and the context fit with kephale as source. Paul is affirming our interdependence, both on God and on one another. Yes, woman came from man, but man comes now comes from woman. All come from God.

The Assemblies of God position paper "The Role of Women in Ministry" has a brief statement regarding kephale.

"The statement that "the man is the head of the woman" has for centuries been used to justify the practice of male superiority... Two alternative translations for kephale ("head"), debated widely by contemporary evangelical scholars, are (1) "authority over" and (2) "source" or "origin." ...Taking the passage as a whole, the second meaning fits as well as or better than the first meaning, leading to the summary statement of verse 12: "As the woman is of the man, even so is the man also by the woman; but all things [are] of God." Even the relationship between the eternal Son and the Father--"the head of Christ is God" (11:3)--fits better as "source" than "authority over" (cf. John 8 :42).

I Just Want an Equal Partner

Last night I watched "The Courtship of Eddie's Father" starring Ron Howard and Glenn Ford. The movie inspired a television series of the same name, and is a sentimental but sweet story about a widower finding love again. (Ron Howard, aged eight, makes the movie.) There are two love interests in the story, and one (the one with a high-powered career) says to Eddie's father, "I just want to stand beside a man as equal partners. Is that so much to ask?" He replies, "Why no, I don't think so, but it is certainly unlikely, so you'd better be content with suffrage for now."

Of course, the dialogue is dated--thankfully! But as I listened I thought, "Why is it so unlikely? She is saying exactly what I feel. I don't need to always be led. I don't want to be the leader either for that matter. At least not all the time. I don't want to have to figure out who is boss. I just want to stand beside my husband as an equal partner. Is that too much to ask?"

Posted by Dorcas (aka SingingOwl) at 7:30 AM

Very well said mom. And those who disagree should either so proof or search their own hearts and preconceived ideas...
Kris

Sorry, that is "provide proof"

This is very well done. This needs to be tackled in the AGLN discussions and AG Think Tank blog. I would like to hear from you on other New Testament passages on this subject.

I will be writing more about this in future, just probably not right away.

Is this Rich Tatum or Rich York? Or a brand new Rich?

Hi! My name is Brenda and I stumbled across your website. I am a student at Fuller theological seminary and am touched by some of your blogs. I have been struggling and fumbling through some of these theological issues for a few years and it is nice to have someone put things so eloquently. Thank you!