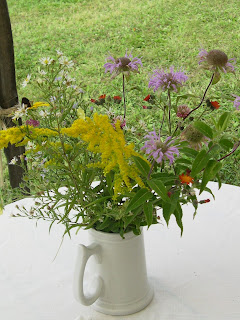 Presbyterian Gal has this week's Friday Five and she asks:

1. What is your sweetest summer memory from childhood? Did it involve watermelon or hand cranked ice cream? Or perhaps a teen summer romance. Which stands out for you?

That's hard. I'm not good at picking one thing. One I remember that was bittersweet was Ken's grad night at Disneyland. I don't know if this still happens, but back in the 60s graduating classes went to Disneyland for all-night fun. Ken was going to be going into Marines Corp boot camp immediately and it would be three months of separation. (Yep, I married the guy I dated in high school, but we did attend different schools) So we were anticipating being apart, and at that age three months seems like a year. So at one point in the wee hours of the morning, tired and starting to feel sad, we hopped on the Mark Twain Steamboat and rode around and around and around for a while in a couple of deck chairs in a secluded little corner.

2. Describe your all time favorite piece of summer clothing. The one thing you could put on in the summer that would seem to insure a cooler, more excellent day.

My sister, Darlaine, and I made something that the Simplicity pattern book called a "Nothing." It really was relatively modest for Southern California. It was just a knee-length little dress with an elastic band at the top. It was great to put on after swimming, or if you were a bit sunburned. Nothing to stick to you. Just nice flowy cotton, no sleeves, no buttons, etc.. Mine was purple.

3. What summer food fills your mouth with delight and whose flavor stays happily with you long after eaten?

Being originally from Southern California, one of the things I grip about is that the Midwest doesn't get great fruit. Not like California anyway, where we picked oranges off the tree and my dad grew grapes in the backyard. Our Wisconsin winters get so long, and fruit in summer tastes good. We are starting to get better fruit these days. I love all of it, but nothing beats the flavor of a perfectly ripe, juicy, sweet peach. Of course, it does taste even better if it is topping a bowl of just-cranked homemade vanilla ice cream.

4. Tell us about the summer vacation or holiday that holds your dearest memory.

My family had issues. But the one time in my childhood that we seemed to be able to have fun with both parents was on camping trips in the summer. Yosemite National Park is the most beautiful place I've ever seen. Camping by a burbling stream, being just a little scared of bears, campfires at night, hiking (which mostly meant riding piggy-back on my dad's shoulders), playing "baseball" with a tree branch and pine cones, eating food we wouldn't eat at home. Canned hominy, for example. We never ate it at home, but we always ate it when camping. Same with Pork & Beans.

5. Have you had any experience(s) this summer that has drawn you closer to God or perhaps shown you His wonder in a new way?

I have been trying to be more focused about NOW and less concerned about the future. Part of that for me has been taking time to sit on the deck in the a.m., taking pictures, noticing the sky and the flowers and the fields. It is not one specific moment, but it has been a season of seeking to be more at peace and okay with living the moment.

Bonus question: When it is really hot, humid and uncomfortable, what do you do to refresh and renew body and spirit?

People here complain about the heat. I think they are nuts. It can get humid, but nothing like the south. And I always know that snow and ice and sleet and frigid temps will be here for months on end. So I don't tend to get miserable, but if it is really bad I just refuse to go outside. I sit inside with my a.c. and read and eat a fruit Popsicle. This question did make me think of North Carolina however. Now THAT is horrible heat and humidity. We were in "enlisted housing" and broke. And Ken spent his days at the base in air conditioning, but baby Kris and I were stuck at home with fans. If it was unbearable, we would get in the bathtub and blow a fan right on us and sit there. After Kris couldn't sit any more we'd go to the nearby Winn Dixie (grocery store) and walk around for as long as I could pretend to be actually going to buy something.
Posted by Dorcas (aka SingingOwl) at 1:31 PM

good play...thanks for sharing your memories!

I married the guy I dated in Hight School too. Some things are just meant to be! Love that bonus answer, the things we do....!

It's amazing to me, marrying your high school sweetheart!

I used to sit in coffee shops in off hours and read when A/C money was tight.

I love the Nothing!

I love Yosemite national park too. wow! God is amazingly creative when you come to think about it.

as for fruit tasting good in the summer. Finnish strawberries are so sweet and juicy (and rather small) cos they more or less ripen overnight in the midnight sun. Love it.