Stepping Across to the Other Side

So the LORD God said to the serpent, "Because you have done this, cursed are you above all... And I will put enmity between you and the woman, and between your offspring and hers; he will crush your head and you will strike his heel." Genesis 3:14-15

In your relationships with one another, have the same attitude of mind Christ Jesus had: Who, being in very nature God, did not consider equality with God something to be used to his own advantage; rather, he made himself nothing by taking the very nature of a servant, being made in human likeness. And being found in appearance as a human being, he humbled himself by becoming obedient to death— even death on a cross! Therefore God exalted him to the highest place and gave him the name that is above every name, that at the name of Jesus every knee should bow, in heaven and on earth and under the earth, and every tongue acknowledge that Jesus Christ is Lord, to the glory of God the Father. Phillipians 2: 5-10 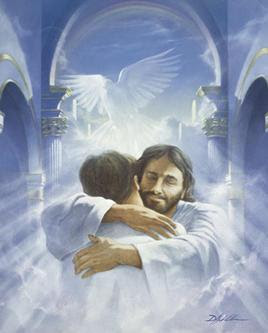 This looks like a welcome--but it could also be a farewell.
Today I sat at the bedside of a dying woman. Her name is Shirley. Her grandson had asked me to come and pray with him and for his grandmother. He dearly loves her, and she was a significant influence in his life from the time he was born. He was very sad, as he knelt at her bedside, cried and caressed his grandmother's hair. He has never known life without his grandmother in it.

She was outwardly unresponsive, her breathing so shallow as to be almost imperceptible, her hands already growing cold to the touch. It made me get teary-eyed too, partly because my heart went out to him in his grief, and partly because the last time I was in a nursing home it was to be at the bedside of my own dying mother just about one year ago. The scene felt all too familiar.

One of her daughters was there too, a woman I know slightly. We talked quietly about her mother and memories as people do at such time. Other family members arrived and after a while I decided it was time for me to go. I had never met Shirley, and I wasn't exactly there in an official pastoral capacity, so I wasn't sure of what I would say or do. I asked the Holy Spirit to help me as I went over to Shirley's bedside, touched her cheek and spoke to her. I felt oddly connected to her, thinking of the time when it will be me who is about to cross over to "the other side" and wondering how old Trinity will be, who will come to say goodbye...all thoughts that passed through my mind in just a few seconds.

I told her that I know it has been hard for her, formerly an active and vibrant person, to have been imprisoned for five long years in a body made disabled by a severe stroke. I told her that family members were arriving and that she would be hearing their voices as they came to say good bye and tell her they love her. I told her not to be afraid, that even as family gathered around to say good bye, that family on the other side were gathering as well, preparing to welcome her with hugs and love and joy. Then I prayed for her to have a peaceful home going, comfort for the family, and so on. There were tears, and comments about how they would not wish her to stay, but how they would miss her.

What does this have to do with Christmas?

I kept thinking of what my mind had pictured as I spoke to Shirley--a woman about to take a journey of no return. The idea of family, friends, angels--and Jesus waiting to welcome her with open arms--seemed so real. I could picture it as I drove through snow-covered and dark countryside on my way home.

Then I thought of something I have never really considered before. What must it have been like when the reverse journey was about to take place? How strange it must have been as the Anointed One was about to take a journey of no return, so to speak. What must the conversation have been? How did it seem to people in Heaven--think of Moses, Abraham, Sarah, Esther, Isaiah....and how did it seem to the angels to watch and wait as the moment came closer and closer? What did they feel? Sadness mingled with joy? A sense of impending loss?

And what about the One about to take that journey, aware of his purpose, aware that he was going to fulfill a divine destiny of crushing the serpent's head and reconciling humankind to God--and also aware of all that was about to be left behind. Intimate fellowship within the Godhead, constant connection, beauty, perfect love, harmony, peace, all these would soon be lost as he lost conscious awareness of just who he was. And power. What must have been the scene as the one who created us prepared to submit to his creation, to become helpless and dependent--a human baby!

I was aware of the mystery of life and death and the unknown as I stood in a room in an ordinary nursing home and sensed the nearness of God. And how much greater still is the mystery of incarnation! One loving group was saying good bye, and others were being prepared to say hello and to welcome a new life into loving arms: a baby boy, the Prince of Peace, Emmanuel, GOD with us!

What must it have been like at the moment of departure when those on "the other side" were saying good bye and preparing for a change like none other? And then the Eternal Word emptied himself, stepped out...and became flesh and dwelt among us.
Posted by Dorcas (aka SingingOwl) at 9:11 PM

Labels: Meditations or Devotions, Trying to Make Sense of Life

First part: what a beautiful way to minister to this dying woman and her family. I know we're about the same age, different states, different denominations, but I hope when it's my time that there is someone near with as much wisdom as you about what to say.
Second part: I love the connection you made here! Have you ever seen the film Green Pastures? It's not so much in favor now since it was a story of Black people written by a white man, but the film was well done (and employed a lot of African-American actors) and there is a scene where the angels are watching from heaven as Jesus carries the cross which is very poignant and powerful. Your thoughts expanded on that theme for me. Thanks, and Merry Christmas!

I'[ve heard of Green Pastures, but I have not seen it. I'll see if I can rent it. And thanks for your kind comment--and MERRY CHRISTMAS to you too!

Just stopping by to wish you a Merry Christmas.

Thank you for sharing this. It will come soon, in our Lord's timing, when we too will cross over. May it too be sweet to us and to those left.
Bless you!

Thank you Singing Owl, I needed to read that today :-)