If you would like to read my "Little Big Foot" posts, there is a link in the sidebar under LABELS. Click on Stories; Little Big Foot, and you can scroll down and read from the beginning. 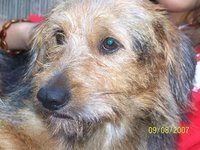 It was early. Much too early. What time had she managed to fall asleep? Charlie seemed completely recovered, judging from the energy with which he gleefully bounced around the blankets.

“Down, Charlie boy! I guess you missed me, eh?”

Groaning, Dee Anna pushed the dog off the bed and sat up. Oh, it was going to be a long day. One night of limited rest was one thing. Two was another thing altogether. She stood up and rubbed her eyes. She had a slight headache. "At least I have curtains on the windows," she thought groggily.

“Mommy? Are you awake, Mommy”

Madeline was calling from downstairs. The smell of coffee wafted up the stairs, and something else that smelled of cinnamon. Fishing her robe from her suitcase, Dee Anna put it on as she went downstairs, a little unsteadily.

A pajama-clad Madeline hopped from her chair, brown pony tails bouncing, and gave her mother a hug. “I missed you! Mrs. Herndon made cinnamon toast!”

Mrs. Herndon was an older woman who had been a widow for many years. Childless herself, she loved children. She had taken a liking to Madeline from the first and had become a valued friend and helper. She turned from where she was extracting a cookie sheet from under the broiler.

“Good morning, Rev. Dee Anna. I heard you come in. What time was it? Three or so?” Without waiting for an answer, she added, “I know you are going to need some coffee this morning for sure. Have some cinnamon toast.” She used a pancake turner to plop a piece of fragrant toast on a plate, and then another. “One for you and one for Madeline. You will be happy to know that Madeline was good as gold” she said with a smile for the little girl. “Here, let me get Charlie his breakfast. As it turned out, we didn’t even need to take him to the vet. After a few hours he perked up and has been his old self ever since.”

She shared a quick critique of the visiting minister who had filled in at Eastside on Sunday, lamented the flooded streets, and commented about what Hillary Clinton had said on last night’s news broadcast. She thanked Dee Anna for letting her watch her “favorite girl,” keeping up a steady stream of conversation as she poured coffee for Dee Anna and orange juice for Madeline, fed the dog and washed a few dishes. She asked how Dee Anna’s “little get-away time” had been, but didn’t really seem to want an answer.

Dee Anna did not need to say much, and for that she was grateful. She was too tired to be very sociable.

She did hug Mrs. Herndon as she stood with her at the front door. “Thank you so much. I am sorry I took longer than I expected. What a blessing it is to know that if I must be gone Madeline will be with someone who takes such good care of her.”

She really did love the older woman. She had been invaluable after Michael died.

At the thought of Michael, Dee Anna felt an all-too-familiar sensation of hollow space inside. She ignored it and called to Madeline, who was still sitting at the kitchen table, holding her orange juice in one hand and scratching Charlie’s curly head with the other.

“Come on, I need to get you to summer school a little early if I can. I have a busy day at the church” Dee Anna called as she went upstairs. She stepped into Madeline’s room. It was small but cheerful, decorated in sunny yellow with lime green and pink accents. White curtains and trim softened the bright colors. Dee Anna thought of the purple room in the North Woods Chapel parsonage. Then she thought of the orange closet and the carpet that resembled a pizza. Sighing, Dee Anna opened the closet door and found her daughter’s school uniform.

A little later, showered, dressed, and reasonably awake, she pulled up to the Eastside Elementary School. Madeline hopped over the water running down the curb and then turned to wave good-bye as she ran to the steps of the lovely old stone building. Remodeled into a school some years ago, the building’s interior was completely functional but its exterior retained the charm of an earlier age. It had once served as a Christian education wing of Eastside Church. Michael had been very proud of the school project. Dee Anna loved having Madeline so close by.

“I love Madison. I love Eastside Church. I love the school. I love Mrs. Herndon!” thought Dee Anna. She entered the church, waving a greeting to the groundskeeper who was getting an early start on pulling weeds from the soft ground. After last night’s downpour, the morning air felt clean and pleasant. “He is going to be muddy for sure....and I love the flower beds.”

She walked down a hallway and unlocked the door to her office. “And I love my office! I love the paintings, the furniture, and the stained glass window on the rear wall. I am not going to live in some god-forsaken, little town in the boonies with people who milk cows and smell like smoke and eat venison.”

She sat in her chair and gazed at the photograph that had sat on a corner of her desk for three years. It pictured Michael and Madeline on the shore of Lake Monona. Michael held Madeline's hand, and they both wore happy smiles. It was a late summer day. Madeline would enter Eastside's Kindergarten the following week.

Michael. She leaned back and closed her eyes. “God, I miss him” she said. “I know I am whining, but you know I love this place and these people and I don’t want to even think of leaving. I do not know why I thought going up to Little Big Foot was a good idea.” She had agreed to send a resume at the request of a denominational official who was encouraging her to return to her roots. Dee Anna had agreed, wondering if it would be good to live somewhere she was not reminded of Michael at every turn.

The daughter of strict, church-going parents, Dee Anna had attended church all her life. An exceptional student, she had graduated a year early from high school and had gone straight to a four-year Bible college. She had spent two years as a children’s pastor in a medium-sized church in Lubbock and had resigned to enter a well-known seminary to earn her Masters of Divinity degree. Just four months from completion, she quit. Too late, she had realized that what she had believed to be unshakable convictions was simply habit. She was tired of church and tired of being a “good girl” and wondering if anything she had ever believed was true. She simply allowed her ministerial credentials to lapse. She wrote her parents that she was just “taking a break.”

She had found a decent job as a loan officer in a bank and made enough money to rent an apartment. She made friends with two women at the bank. They were women, she was sure, of whom her mom and dad would not approve. They were smart and sophisticated and fun. They introduced Dee Anna to Nasher Sculpture Center, the Dallas Museum of Arts and the Meyerson Symphony Center.

They also introduced her to "Deep Ellum" a fascinating place where offbeat bars reverberated with blues and jazz. She learned that she liked mixed drinks with vodka. Culture, music, and booze were an intoxicating mix for the daughter of fundamentalists.

For a while she went to church occasionally, but she soon found that nightlife led to sleeping in on Sundays, and she stopped attending church altogether. Her letters home were less frequent, and eventually nearly stopped altogether. It wasn't like she ever got many back anyway, she reasoned.

She had decided, without really thinking about it, that at age 25 she was overdue for some fun. And it was fun for a while. "There is pleasure in sin for a season" thought Dee Anna, remembering. Her mother had often quoted that scripture to remind Dee Anna that a "worldly life" would only be temporary fun . "Mom, you were right about that much. It was fun for a while. And then it wasn't. What is fun about a hangover and feeeling like you've been hit by a truck and puking till you pass out? I faked it pretty well though."

She had a friend who had left Lubbock and moved to Madison. Dee Anna hadn’t known where else to go. She just knew, after the night at the downtown Dallas church, that she had to make changes. She sure wasn't going home. From Dallas, Texas to Madison, Wisconsin seemed like change indeed. Unfortunately, her friend had transferred to New England only three months after Dee Anna arrived, leaving her friendless and lonely. But she had introduced Dee Anna to the Reverend Michael James Hanson.

Dee Anna leaned forward and glanced at her desk clock. It was 9 a.m. Time for the phone call.
Posted by Dorcas (aka SingingOwl) at 10:04 PM

Dear Singing Owl,
You continue to surprise me with this story.Just when I think things are going to go along one avenue you throw in a cul de sac.
I am surprised to find Dee Anna as a woman who is raising a child alone,but it adds to the storyline in my opinion.
As always I am enjoying the installments and eagerly await the next one.