Odds and Ends from General Council '09

Some relatively random impressions of how things went at the Assemblies of God General Council.

The "Fine Arts Festival" was happening at the same time as General Council. This means that AG teens from around the nation are in the finals of a competition that starts in the local church, goes to the district, the region, and ends up with the finalists at General Council. There was so much energy and fun all around us in the convention center as the kids practiced anywhere they could find an empty spot or corner--a living video here, a solo there, a violin or guitar playing somewhere else. And lots of matching tee shirts with youth group or church names on the back. I also was aware of the diversity I saw among the youth. There were many Asians, Hispanics, Blacks, etc. We are clearly no longer a fellowship of mostly white, rural people. The Hispanic churches account for the largest share of the continued growth of the Assemblies of God.

Something that happened this year that we thoroughly enjoyed was that we had a combined service one evening with the youth. WOW! It was wonderful. Thousands of people singing, worshiping, rejoicing together. Everyone loved this inter-generational service, including the kids. And we got to hear Shane and Shane.

AG culture, that is. Every morning before the business sessions started a pastor had about ten minutes for prayer and a devotion. Not new. What was new was that the pastors who were asked to do this were all WOMEN ministers. Is this a small thing? Perhaps. But it speaks volumes. I could be mistaken, but I think this was a first. And it did not only happen once. If the change doesn't happen with leadership it is not likely to happen. Was it accidental that women were featured in this way? Not likely. Young ministers and minorities were more in evidence as well. The speaker for the evening service that was combined with the youth was a young, black pastor, Herbert Cooper. He was a wonderful (and funny) preacher. Well, I admit it did not hurt that he looked a lot like a hefty version of Denzel Washington.

It seems the Assemblies of God is coming into the 21st Century. The changes have been noticeable in many places (George Wood is on Facebook for example), and these changes were evident at council as well. I was impressed with the overall organization and look of things.

No Longer a Fashion Show

I know this was partly due to Florida heat and humidity, but the clothing was casual. This is a good thing. I mean, I recall times when it seemed that the main attraction of a GC for some people was that they could display their best outfits and jewelry--to such a degree that one almost felt out of place if not decked out. This more casual attitude was evident in many areas, not just clothes. And while the heat played a part, I'm sure, such was not the case when council was in CA or TX. So something else is happening. I hope it means a new willingness to take ourselves less seriously and walk a bit more humbly.

Ken and I attend because the chaplains dept. is part of USA Missions. Among other stories, we heard a moving and amazing testimony from a former prostitute, drug addict, abuse victim, single mom with nowhere to go (except to church, evidently) and what happened to her when two inner-city pastors (a husband/wife ministry team) reached out to her with genuine love and compassion. Five years later she is drug-free, employed, and ministering to others. It was such a wonderful story, and the nervousness of the speaker detracted not at all. We gave her a standing ovation (and she cried). What a reminder it was of the reason we do what we do!

I have never preached, and never heard, a sermon with Leah (first wife of Jacob) as the central character. Dr. Wood preached a sermon about the legacy of our lives that was truly unforgettable. Was it an accident that the sermon was about a relatively unremarkable (not really) woman? I do not think so. Our new General Superintendent's regard and kindness to women is notable. And along with the women ministers who shared devotions, I think the sermon was very much "on purpose."

When Dr. Wood was elected two years ago it was for only a two-year term since he was serving the duration of the unexpired term of Thomas Trask who resigned mid-term. So this year we had an election again, and Wood was elected to serve a four-year term. Two years ago I heard snippets of conversations about how he was "too old" to take our church in a fresh direction. One young pastor commented in my hearing that Wood would be a good person to serve for two years and help us transition, and that he expected a younger person would be elected in 2009. Well, George Wood was elected by an overwhelming majority on the first nominating ballot. He has won the hearts and minds of just about everyone. YAY!

Our First Woman, and Our First Young Guy

In response to a resolution that passed last time, we elected two additional members of the Executive Presbytery. For the first time we have a woman minister, and a minister under age 40 serving in this the leadership body (a small group). The woman was Beth Grant, who some of you know. I voted for Dr. Debbie Gill, but Beth is great too.

Inexplicably, last council we voted to elect a woman and a young person to serve on the executive team, but an almost identical resolution to add a percentage of women and young ministers to the General Presbytery (a larger body) was defeated because it narrowly missed the 2/3 majority required. Naturally, a similar resolution was offered this year. All of us thought it would pass this time. Especially since when Beth Grant shared a heartfelt thank-you to the assembled voters for electing her, and reminded us of why this move was historical and important. How could we applaud adding women/youth to the executive presbytery and not also add them to the general presbytery? The discussion in the business meeting got lengthy, and many substitute motions and proposed amendments clouded the issue. Long story short, by one (YES, ONE) vote, the whole thing was sent back to a committee for further review. ONE VOTE! Sigh. Next council is in 2011.

I will refrain from comment, because it just wouldn't be fittin'.

Overall, it was a remarkable General Council 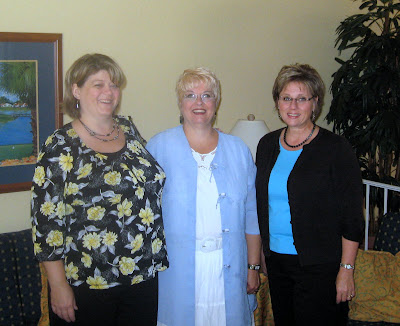 Here I am with two other rev gals (no, not official ones). Ken took the picture of us just before we headed out into the Florida heat and humidity. We looked better in the a.m. than in the p.m. :-) 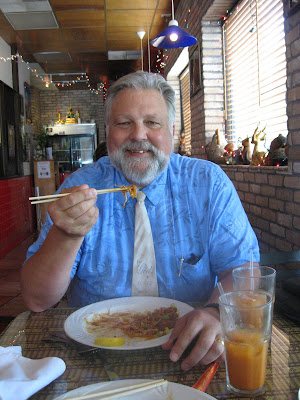 Ken and I discovered what was advertised on the menu as "Orlando's Best Kept Oriental Secret." It was a tiny Thai restaurant that was easily overlooked--not quite sure how we ended up there. When we walked in and sniffed the amazing aroma, we knew our food was going to be good. Ken learned to use chopsticks in Okinawa when he was in the USMC. 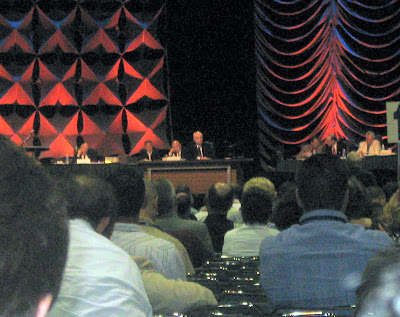 A shot of Dr. George Wood (I love that guy!) chairing one of the business sessions. 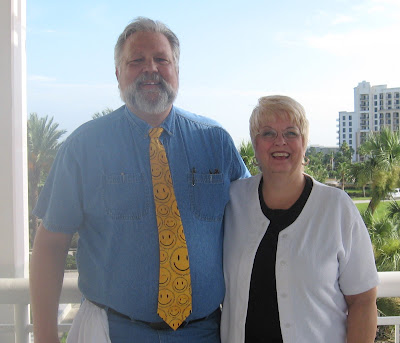 Ken and me outside the convention center. 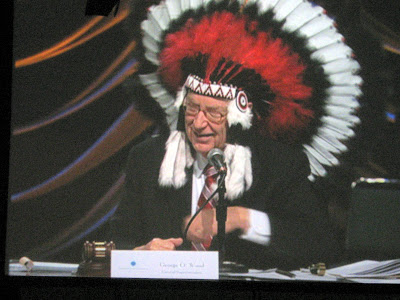 A gift to Dr. Wood from AG missionary (and Native American) John Maracle.
Posted by Dorcas (aka SingingOwl) at 10:31 PM

Sounds almost all great! Is that sermon on Leah available anywhere? I'd sure like to read/hear it.

This all sounds quite encouraging and uplifting.

My pastor is a delegate to the church-wide convention up-coming. I expect it will have uplifting and encouraging times as well, but there are big issues that have major pros and cons, and I think that is what will be reported in the general media, to the detriment of all. And maybe the church body will be split. Tough times.

Wonderful report. We have been encouraged by our pastor to listen (via internet) to the tape of Dr. Wood's sermon on Leah. Looking forward to it.
So very glad you enjoyed your time and I am delighted with the addition of a woman on the Exec. Presby. It leads the way for other conservative denominations to do the same.

it sounds great, so much positive stuff. It did my heart good to read this.

Yes, the Leah sermon is available! I'll post a link in a post later on. I'm on a lunch break right now, and it will take some time.

It was fun watching council over the internet. Even though I couldn't vote, at least I had the opportunity to follow along from home.

I was also disappointed that the resolution to put women and younger ministers on the general presbytery got shelved until 2011. At least our leadership is making strides concerning women in ministry.