The Fear of the Lord II

Here is a bit more on this subject.

Psalm 111:10 The fear of the LORD is the beginning of wisdom;
A good understanding have all those who do His commandments.
His praise endures forever.

Maybe I'm in Oxford mode, or just fantasy mode, but I mentioned Aslan (from C.S. Lewis' Chronicles of Narnia in the post below on this subject, and now a comment on my original post has me thinking about a scene

from Lord of the Rings from Lewis' pal J.R.R. Tolkien's famous trilogy.

Perhaps you recall the scene near the beginning of the movie where Gandalf the wizard comes to the home of his longtime friend, the hobbit Bilbo Baggins. Good natured Bilbo has had "the ring" for a long time, and Gandalf has come to tell him that he now must give up the ring so its evil influence must be dealt with once and for all. We watch Bilbo's face change drastically as he begins to grow suspicious of Gandalf, and he clutches the ring (sin?) tightly as he scowls and snarls, "How do I know you don't just want the ring's power for yourself?' Gandalf, who is very kind but very powerful, suddenly changes too. His genial expression of kindness changes to anger and the room darkens and lightnihg flashes, Gandalf shouts, "Bilbo Baggins, I am not some conjurer of cheap tricks!" Bilbo looks shocked at the change in Gandalf, and then grows sorrowful and runs to throw his arms around the wizard and tell him he is sorry. He gives the ring to Gandalf, who again looks at Bilbo with a face of love and compassion as he pockets the ring.

The fear of the Lord is like that. Hopefully, we know God loves us, but we must also know that Almighty God is not a conjurer of cheap tricks. Understanding his power and then realizing that this God-in-Flesh died for us should make us run to Jesus (as Bilbo did to Gandalf) rather than away--even if God's countenance seems a bit fierce!

Recall with me a few scriptural accounts of God encounters and what happened. I am only posting small snippets, but I put the chapters so you can read more if you like.

The Lord appeared to him in a blazing fire from the middle of a bush. Moses stared in amazement. Though the bush was engulfed in flames, it didn’t burn up. “This is amazing,” Moses said to himself. “Why isn’t that bush burning up? I must go see it.” God called to him from the middle of the bush, “Moses! Moses!” “Here I am!” Moses replied. “Do not come any closer,” the Lord warned. “Take off your sandals, for you are standing on holy ground. I am the God of your father—the God of Abraham, the God of Isaac, and the God of Jacob.” When Moses heard this, he covered his face because he was afraid to look at God. I am aware of [Israel’s] suffering. So I have come down to rescue them from the power of the Egyptians and lead them out of Egypt into their own fertile and spacious land...seen how harshly the Egyptians abuse them. Now go, for I am sending you. Say this to the people of Israel: I Am has sent me to you...Yahweh, the God of your ancestors—the God of Abraham...Isaac, and Jacob—has sent me to you.”

Deut. 34:10 & 12 Since then, no prophet has risen in Israel like Moses, whom the LORD knew face to face, who did all those signs and wonders the LORD sent him to do...For no one has ever shown the mighty power or performed the awesome deeds that Moses did in the sight of all Israel.

I saw a man dressed in clothing white like linen, with a belt of pure gold around his waist. His body looked like a precious gem. His face flashed like lightning, and his eyes flamed like torches. His arms and feet shone like polished bronze, and his voice roared like a vast multitude of people...My strength left me, my face grew deathly pale, and I became weak. Then I heard the man speak, and when I heard the sound of his voice, I fainted and lay there with my face to the ground. A hand touched me and lifted me, still trembling, to my hands and knees. And the man said to me, “Daniel, you are very precious to God, so listen carefully to what I have to say to you. Stand up, for I have been sent to you.” When he said this to me, I stood up, still trembling.
Then he said, “Don’t be afraid, Daniel. Since the first day you began to pray for understanding and to humble yourself before your God, your request has been heard in heaven.” While he was speaking to me, I looked down at the ground, unable to say a word. Then the one who looked like a man touched my lips, and I opened my mouth and began to speak. "My strength is gone, and I can hardly breathe.” Then the one who looked like a man touched me again, and I felt my strength returning. “Don’t be afraid,” he said, “for you are greatly loved by God. Be at peace. Now be encouraged and be strengthened.”

I saw the Lord sitting on a throne, high and lifted up, and the train of His robe filled the temple. Above it stood seraphim; each one had six wings: with two he covered his face, with two he covered his feet, and with two he flew. And one cried to another and said: “ Holy, holy, holy is the LORD of hosts; The whole earth is full of His glory!” And the posts of the door were shaken by the voice of him who cried out, and the house was filled with smoke.So I said: “ Woe is me, for I am undone! Because I am a man of unclean lips, And I dwell in the midst of a people of unclean lips; For my eyes have seen the King, The LORD of hosts.” Then one of the seraphim flew to me, having in his hand a live coal which he had taken with the tongs from the altar. And he touched my mouth with it, and said: “ Behold, this has touched your lips; Your iniquity is taken away, And your sin purged.” Also I heard the voice of the Lord, saying: “ Whom shall I send, And who will go for Us?” Then I said, “Here am I! Send me.” And He said, “Go, and speak to my people...

Saul (who became known as Paul) - from Acts 9

Meanwhile, Saul was uttering threats with every breath and was eager to kill the Lord’s followers. As he was approaching Damascus on this mission, a light from heaven suddenly shone down around him. He fell to the ground and heard a loud voice saying to him, “Saul! Saul! Why are you persecuting me?” “Who are you, lord?” Saul asked. And the voice replied, “I am Jesus, the one you are persecuting! Now get up and go into the city, and you will be told what you must do.” 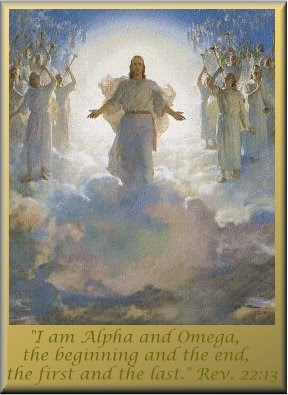 From Revelation 1 (We've seen this glorious being before.)

It was the Lord’s Day, and I was worshiping in the Spirit. Suddenly, I heard behind me a loud voice like a trumpet blast... When I turned to see who was speaking to me, I saw seven gold lamp stands. And standing in the middle of the lamp stands was someone like the Son of Man. He was wearing a long robe with a gold sash across his chest. His head and his hair were white like wool, as white as snow. And his eyes were like flames of fire. His feet were like polished bronze and his voice thundered like mighty ocean waves. He held seven stars in his right hand, and a sharp two-edged sword came from his mouth. And his face was like the sun in all its brilliance. When I saw him, I fell at his feet as if I were dead. But he laid his right hand on me and said, “Don’t be afraid! I am the Alpha and Omega, the first and the last. I am the living one. I died, but look—I am alive forever and ever! And I hold the keys of death and the grave.

In each case, seeing the Lord in person was frightening and unsettling, and also life-changing. God is glorious, powerful, full of light, and causes the humans nearby to have some fearful reactions! But in each case God is about to show great favor, love, even intimacy with the created. Even John, close friend and disciple of Jesus of Nazareth, reacts with strong emotion and even physical "symptoms" but the risen and glorified Christ comforts him and reassures him.

Amazing! Wonderful! We love Him because He first loved us!
Posted by Dorcas (aka SingingOwl) at 1:09 PM

Sounds a lot like a sermon I heard from a renowned preacher woman!

It's all coming together...my perception of Him has changed since we've started talking about this.