From the Rev. Gals web ring: Many of the RevGals using Blogger are experiencing some chaos this week as they move from Old Blogger to New Blogger. (Is that anything like New Coke?) Change is a given in life, yet it's not easy for any of us. So strap on your seat belts and let's talk about it:

1. Share, if you wish, the biggest change you experienced this past year.
I was about to say becoming a grandma at last, but then I realized that this most wonderful occurrence happened this year, on January 7th. So I suppose it would be an internal change, which is fairly recent. I can't explain it, but something or things happened to me which made me sort of emotionally disconnected and struggling to focus. Somehow, that has changed, and I feel more like me than I have in a long while. This is a very good thing.

But since I mentioned Trinity Ann, Grandpa is driving to upstate Minnesota so stopped in at her house. I'm envious, but must share a picture. Why? Just 'cause I can. He was talking to me on the phone when our daughter took this picture this a.m. I could hear her making those little noises new babies make. Sigh. 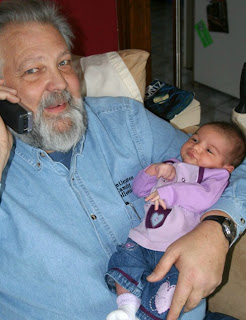 2. Talk about a time you changed your mind about something, important or not.

I changed my mind about "roles." I threw out my ideas of what men should, could, oughta do, and what women should, could, oughta do. I refuse to use the phrases "men's roles" or "women's roles"--because I have had a major shift in my thinking which has changed everything, and I mean everything, in my life. It started a long time ago with wrestling with God's call on my life, but it continued on to affect my (our) marriage in very positive ways, and continued to allow me to see people in a new, fresh, and more free understanding. When a book uses the term, or a speaker, or I hear those phrases on the radio, etc. I have a pang of sadness and frustration, and I also thank God for the freedom I have found. Sometimes I pray for my brothers and sisters in Christ who are still in what I believe is bondage to an idea that they believe came from God. I look back and realize more and more how terribly constricting and NOT GODLY is the view of a large segment of the evangelical church world, even though I still "are one." Stamp out "gender roles." God never invented them. Instead, use the gifts and talents you have for the Kingdom, period. (Rolls, on the other hand, are just fine.... ba dum dump.)

3. Bishop John Shelby Spong wrote a controversial book called "Why Christianity Must Change or Die." Setting aside his ideas--what kind of changes would you like to see in the Church?

By all means, let's forget his ideas, as Quotidian Grace commented in her answers! However, I do believe in the title, to a point. Christianity will not die, but will weaken considerably if we do not change. I would like to see the Church, and I mean the people of the Church, truly and wholeheartedly seeking the heart of God. I would like the ministry, the work, the worship of the church to be the focus of more than just that famous 20%. If we would be in "one accord" in a real sense, we would change the world once again. Where is passion, love and conviction? I'm not talking about emotional responses, but deep faith that comes out in action. We are weak because many things are more important to us than seeking God's heart. For example, during this week of prayer I mentioned a couple of posts down, a tiny percentage of our congregation is taking part, it seems. The good thing is, some have come to the church to meditate and pray specifically every day, or almost. Ah, I'll get off the soapbox.
4. Have you changed your hairstyle/hair color in the last five years? If so, how many times?

Just once. It was too horrendous to do it again. I started getting gray hair at 15, and I started dying my hair in my 20s. I took the big step and let it go. I do look older, I know. And maybe I should have waited a few more years...but the dye is cast....or not cast...or....whatever.

5. What WERE they thinking with that New Coke thing?

They were trying to come up with something new to combat Pepsi's growing popularity, trying to be hip, and they changed for the sake of change itself. ALWAYS a mistake. Forget Coke. Go with Pepsi, even though this cartoon, which made me laugh out loud, says otherwise. 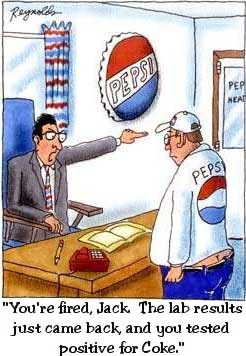 such a cute photo- and good for you on the male/feale roles thing...

GREAT play - and yes, I too have done a redefinition of what wo/men would or could or should do. :) And the Spong thang - amen and amen.

One of these days I am going to have a life changing "I'm going to be a grandma" but I am still waiting.
I think your hair is beautiful and am trying to get the gumption to let it grow out.

"Change or Die" huh? Frankly, I think the Church needs to do more in putting the writings of the Bible into today's terminology. People tend to forget that the Word was written how many thousand years ago and time, society, was not the same then as it is today. The basic teachings remain the same regardless of what time/era one is living in - i.e. Ten Commandments, etc. - but other things, issues about things such as slavery, women, basic human rights - have evolved and in that context it isn't that the Bible is irrelevant, but maybe the voice there needs a tad of a change. There are still too many who take some statements, even those that might seem to be contradicted in subsequent passages, literally. One cousin of mine and I frequently had discussions on certain aspects and he believes the Bible was written by GOD, therefore, it is the LAW! And I chose to believe that God did not come down to earth and sit and pen and publish it Himself, but rather passed these stories, events, rules for living, on to us via the Prophets, Psalm-writers, Apostles, etc and then, through translation after translation, some things maybe get portrayed in what may not be exactly a "correct" manner. I don't know if how I view this is correct, theologically, but it's just my opinion on the way the Book was put forth initially and thus, is subject to translation by so many that perhaps, yet another translation is necessary so it will "change."

Thanks for visiting my blog too today! You have a terrific place here.. I shall visit often! :)

What a great photo! And you know, I'll bet my haircolor is the same as yours (naturally) it's just that it is hidden under all of the haircolor that my hubby isn't ready to let go of. The funny thing is, he is 9 years older, so I'd just look closer to his age. I will probably play along and blog on some of the topics you mentioned. It just might take me awhile.