It's an American Idol Friday Five for the Rev Gals & Pals 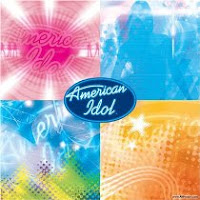 Songbird says: Yes, it's true. I've been watching Season Six of American Idol with my daughter, our first time dipping into this particular well of pop culture. In the spirit of believing you can do anything, as the auditioners so clearly do, please fill in the following five blanks.

1) If I could sing like anyone, it would be: My own self, just waaay better.
2) I would love to sing the song: Well, I can't pick a song about God or Jesus or stuff, 'cause I already do that, so.....well, I always said I'd love to sing the blues so I'll say, it wouldn't matter what song as long as I had an awesome bassist and piano player backing me up. Maybe "Shout."
3) It would be really cool to sing at: The Hollywood Bowl! I used to love that place.
4) If I could sing a dream duet it would be with: Well, since it's gonna be the blues, I guess I'll say Aretha Franklin or Patti LaBelle..
5) If I could sing on a TV or radio show, it would be: Well, since we are fantasizing here, it would be my own show. I'd be an amazin, sought after speaker and singer!
Posted by Dorcas (aka SingingOwl) at 7:05 PM

Your own show! I love it. Good play!

an amazing voice and your own show- very ambitious- I'll tune in!

The Hollywood Bowl! What a great answer!

Oh, I love the Hollywood Bowl! I have such fond memories of many picnics and concerts there. Can it really have been twenty years ago??

If you ever make it big, I promise I will fly to L.A. for that concert.