Friday Five: Companions on the Way 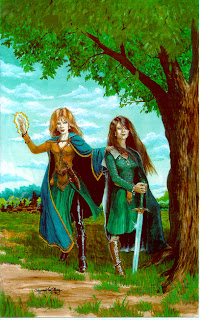 This week the Rev Gals and Pals are thinking about companions. Songbird says, " Dante had Virgil as a guide. Before he had younger siblings, my oldest child had an imaginary friend named Patrick. Betsy had Tacy. Laura Ingalls depended on her brindle bulldog, Jack. All of them were companions on the way.As we take the beginning steps of our journey through Lent, who would we take as a companion? Name five people, real or imaginary, you might like to have with you as guide or guardian or simply good friend."

1. This is tough to answer. But since we are talking about imaginary things, well, I would take my sister, Darlaine, in her pre-Alzheimer's state. I love her so much, and she used to understand me better than anyone else. She also has a deep love for God.

2. I'd also like my Vision Team members to come along. I love them all deeply, and together we are seeking God's heart for each other and for Jubilee Church. So, Pat, John, Darren, Nancy, Wendy, Jim and (husband) Ken...join me on the road.

3. I'd take along Rosa Mae Wead, who mentored me without knowing it, and was the first to show me that a gracious, softspoken loving woman could also be direct, a preacher, strong, and courageous. (Not that I'm exactly saying I'm softspoken..but still.) She passed on long ago, but this is MY list.

4. Okay, may I take a dog? A deceased dog? I'll take our dog Cassie--sweet, loving, fun and in tune with the spiritual world. No kidding. She was an amazing dog and one of the best companions I ever had. I still miss her and she's been gone for many years.

5. In honor of Black History Month, I'll bring along Harriet Tubman. The link tells a bit about this amazing women, called "Moses" by many. She was born a slave, suffered abuse and injury, escaped, and returned to the south 19 or 20 times to assist in bringing about 300 slaves north on the Underground Railroad. She served as a spy for the Union during the Civil War, but was shabbily treated by the government afterwards and worked for decades to obtain a tiny pension. She lived to the amazing age of 93. The link doesn't include much about her spiritual life, but her faith sustained her through many "dangers, toils and snares."
Posted by Dorcas (aka SingingOwl) at 10:25 AM

What you don't want to take me... you want to take the dog! Reminds me of when dad would yell out names ..."Josh, dorcas, Cassie, UH Kris" Great dad, you called the dog before you got my name out.

Just kidding, I still miss her too. And since God knows the desires of our heart, I know we will see her again in heaven, of course me may have to visit her at Josh's place.

Wonderful play, funny how dogs steal our hearts, but they do.

So sorry you have lost your sisterly companion to altzimers, peace and blessings on you both

Kris, the reason I am not taking you this time (I considered it) was that I immediatel realized you would have to bring the adorable Princess Trinity Ann of Halseth along too, since you are her food source. Thus I would be totally distracted cooing at her and trying to get her to smile at me!

Nice post Pastor! I love the graphic too, reminds me of two women I know. If I could only choose 5 companions that would be hard. You would be at the top of my list though!

As you pointed out, I have five numbers, but the vision team alone is more than five...uh oh....

It is crowded on the road, but that may be a good thing.