It is Lincoln's Birthday 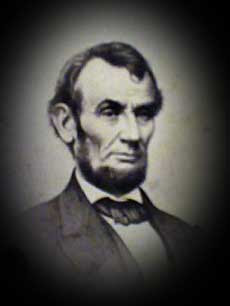 I find his story remarkable, whatever the truth about the contested parts of his life may be. There is no question that he grew up in obscurity and near poverty, but that he rose to prominence by perseverance and hard work, that he became president after losing numerous prior political races, that he loved his children, that he was an amazing yet humble man, despite his bouts with depression and the challenges of living with a wife who eventually went completely insane. It is in vogue nowadays to trash our national heroes. It is certain that while he affirmed the right of freedom for all, he believed the white race to be superior over the black. But that was hardly surprising in the mid 1800s. I also know Lincoln was undoubtedly a deeply flawed person (as are we all) but I wonder what history would reveal if Fredrick Douglas had won the election?
Guiding the fractured nation during the horrific years of our Civil War -- "The War Between the States" surely is one of the most crushing burdens a head of state can bear, especially for a person of integrity and compassion.

Here are just a few quotes that I find notable.

"Whenever I hear any one arguing for slavery I feel a strong impulse to see it tried on him personally."

"If slavery is not wrong, nothing is wrong. I can not remember when I did not so think, and feel."

"I never knew a man who wished to be himself a slave. Consider if you know any good thing, that no man desires for himself."

"The slave-breeders and slave-traders, are a small, odious and detested class, among you; and yet in politics, they dictate the course of all of you, and are as completely your masters, as you are the master of your own Negroes."

"In regard to this Great Book, I have but to say, it is the best gift God has given to man. All the good the Savior gave to the world was communicated through this book."

"The purposes of the Almighty are perfect, and must prevail, though we erring mortals may fail to accurately perceive them in advance. We hoped for a happy termination of this terrible war long before this; but God knows best, and has ruled otherwise. We shall yet acknowledge His wisdom and our own error therein. Meanwhile we must work earnestly in the best light He gives us, trusting that so working still conduces to the great ends He ordains. Surely He intends some great good to follow this mighty convulsion, which no mortal could make, and no mortal could stay."

On What is Right

"With malice toward none; with charity for all; with firmness in the right, as God gives us to see the right, let us strive on to finish the work we are in; to bind up the nation's wounds; to care for him who shall have borne the battle, and for his widow, and his orphan..."

"The probability that we may fall in the struggle ought not to deter us from the support of a cause we believe to be just; it shall not deter me."

"I believe it is an established maxim in morals that he who makes an assertion without knowing whether it is true or false, is guilty of falsehood; and the accidental truth of the assertion, does not justify or excuse him." (TAKE NOTE, SENDERS OF INTERNET EMAILS!)

"Those who deny freedom to others, deserve it not for themselves; and, under a just God, can not long retain it."

"At what point shall we expect the approach of danger? By what means shall we fortify against it? Shall we expect some transatlantic military giant, to step the Ocean, and crush us at a blow? Never! All the armies of Europe, Asia and Africa combined, with all the treasure of the earth (our own excepted) in their military chest; with a Buonaparte for a commander, could not by force, take a drink from the Ohio, or make a track on the Blue Ridge, in a trial of a thousand years. At what point, then, is the approach of danger to be expected? I answer, if it ever reach us it must spring up amongst us. It cannot come from abroad. If destruction be our lot, we must ourselves be its author and finisher. As a nation of freemen, we must live through all time, or die by suicide."

"I do not think I could myself, be brought to support a man for office, whom I knew to be an open enemy of, and scoffer at, religion."

"It is said an Eastern monarch once charged his wise men to invent him a sentence to be ever in view, and which should be true and appropriate in all times and situations. They presented him the words: 'And this, too, shall pass away.' How much it expresses! How chastening in the hour of pride! How consoling in the depths of affliction!"

"My friends, no one, not in my situation, can appreciate my feeling of sadness at this parting. To this place, and the kindness of these people, I owe everything. Here I have lived a quarter of a century, and have passed from a young to an old man. Here my children have been born, and one is buried. I now leave, not knowing when, or whether ever, I may return, with a task before me greater than that which rested upon Washington. Without the assistance of the Divine Being who ever attended him, I cannot succeed. With that assistance I cannot fail. Trusting in Him who can go with me, and remain with you, and be everywhere for good, let us confidently hope that all will yet be well. To His care commending you, as I hope in your prayers you will commend me, I bid you an affectionate farewell." (Saying farewell to Springfield, Illinois as he departed for Washington D.C.)
======
We lived in Washington D.C. when our children were small, and a visit to the Lincoln Memorial (night is best!), Ford's Theatre (where Lincoln was assassinated) and to the house across the street where he died were memorable. I also recommend a visit to the Lincoln Home and the Lincoln Museum--and maybe Lincoln's Law Offices too--if you find yourself in Springfield, IL with some time to spend.
Posted by Dorcas (aka SingingOwl) at 3:54 PM

I had forgotten that today was Lincolns' birthday. Thanks for reminding me and publishing such great quotes.

The problem with the present holiday system is that instead of really honoring the Presidents by learning about them in school, we just think of the day off as ABOUT US getting a break.

I always remember Washington's birthday more than Lincoln's because it is also my Mom's birthday, so I'll be traveling in her, and your, direction next week.

The 12th is my dad's birthday. He's always been very pleased to have been born on Lincoln's birthday. Thanks for the interesting post!

Thanks for posting the quotes from one man who was (in my opinion) a truly great man! Too bad more folks don't adhere to the standards he set forth so many years ago.

Anyone who had a deli named after them must have done something right!

What a grand man among men! Thanks for this!

Thank you for the awesome quotes. I'm going to have my son read and choose one to write about - he's 17. Good words to reflect on. I remember my friend's mom always saying, "This has not come to stay - it has come to pass." I've thought on that several times when in difficult times. I've learned so much by teaching my son American History and American Government - things I never learned or forgot. Great studies and I'm glad I'm there to balance the teachings of the one book.