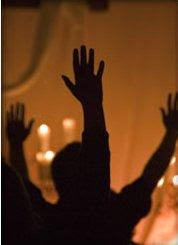 A few posts down I mentioned that this has been a week of prayer at Jubilee Assembly of God--and also a very difficult week for me. Friday evening we concluded with a prayer gathering that would begin at 7 but have no set ending time. I struggled with plans, hoping that my "down" mood would not affect others. A few hours before time to began I felt greater freedom, and ideas came for a very loosely structured time, praise, petition, communion.

I did not know what to expect, knowing that many who would have usually attended a time of prayer were out of town or unavailabe for other reasons. 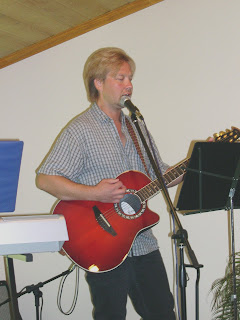 Darren, our worship leader was already there when I arrived, quietly playing his guitar and singing. The cold was bitter. The temperature was below zero, and the moon shone in a clear night sky as cars begin to arrive, tires crunching on the snow. Inside, the sanctuary was warm and inviting. Candles glowed, and the light behind our wooden cross cast a soft light over the platform area. The turnout was not large, but as we gathered in a circle of chairs and began to sing, the presence of God, once again, seemed warm too. John and Kelly (our youth leaders), Deacons Pat and Jim, Jim's wife Phyllis, Aaron Jeremy, Jordan, Johnnie....and more. "Let the glory of the King rise among us..." we sang, and then the hymn, "O God, Our Help in Ages Past"--I was struck with the thought that without God's grace and enablement, we can't even worship as we desire to.

(The pictures are of Darren and Pat on a recent Sunday (morning.)

We took turns praying aloud for needs that we had mentioned to God all week long. Families, people in need, our community, our nations, our local church and pastor, the Assemblies of God, the universal Church, the nation, and the world. Then Darren led us in a second time of worship as we prepared to share communion. Cubes of Phyllis' wonderful, just- baked, bread sat on the altar plate, and a chalice sat next to it. I invited people to take the bread, but to give it to someone else and then to pray for that person. The time that followed was unhurried, and it was so sweet that the sense of love and unity was almost palpable. Then we took another piece for ourselves, dipped it in the cup and spent time praying in silence as we partook together in this ancient ritual of remembering Jesus' death and anticipatiing His return. Communion is always meaningful to me, but there was something so intimate about this setting, a small group of believers in a small church, sharing "bread and wine" by candlelight--and outside the dark and the wind and the cold.

Darren played a simple chorus, "Let it Rain" and once again the warm sense of God's presence was with us as we raised our hands (this comes easily to Pentecostals who are very used to it, even though at first it is difficult for newcomers) in a gesture of surrender to God. It almost did seem like warm water--the worship ebbed and built--and ebbed again. Some sat, some stood in silence with hands lifted or palms up, some knelt, some were prostrate. Several of our young people were there and we prayed for them. They dropped some of their usual shyness with the adults, and they joined us in singing, "Let it rain....let it rain...open the floodgates of Heaven..." The simple guitar and our voices were so beautiful--harmonious, and worshipful. There were times of silence, times of petition, times of exortation or encouragment, times of joyful praise and times of peace. You know how sometimes a prayer meeting can go on long past the time your mind left the scene? Not this night. We concluded at 10 p.m., aware that the cold was increasing and we'd better head home.

Some time back I posted about the presence of God. I asked people to comment about their experiences and some did. I'm still pondering it, over a year later. What is it that somehow seems to pull aside the curtain between our busy, distracting, physical reality and allows us a fuller glimpse of spiritual realities? I don't know. Was it the prayer that happened during the week? I don't know. It certainly was not that the pastor was full of excitment or expectation! I don't know why the "love of God poured out in our hearts" was so strong that it was almost more than I could bear at times. Was it the candlelight and the music? Those things help us focus perhaps, but not every candlelit service is as full of an awarness of God as this one was.

Perhaps that is exactly as it should be. Perhaps God wills it to be so in order that, once again, we are reminded that it is not about us or our plans, that God's ways are higher than ours, that the Holy Spirit is neither tame nor predictable. Praise be to God for those times, however!
Posted by Dorcas (aka SingingOwl) at 8:56 PM

Words really can't describe what happened that night, but we were being loved by the Lord as a group and the feeling of oneness was amazing. We all let our guards down and just let it happen. The comfort was from the Lord and each of us was able to set aside our issues and problems to engage with the Father on his terms, not our own. Praise the Lord!

What a wonderful evening. I wish I lived closer. Must visit you and your church some time this year.

CO, email me and tell me where you are. Maybe we can work something ot?

wow!You and Pat have such a great way of writing things out I just love to read your guys stuff!I think God was romancing us last week.

sorry it's it's Me john,on that last one

Beautiful post! I've always loved the hymn "Oh God Our Help in Ages Past" but henceforth, it will take on a much deeper meaning when I sing those words. I've known the song for many, many years but never looked at it the way you put it in this post. Thanks again for some very inciteful thoughts.