Sixth (and last) Week of Sabbatical

On the last Sunday of sabbatical, Oct. 21, I had a plan, but 'twas not to be. The day before had been entirely consumed with travel, first by plane and then from the airport to our home, a considerable distance. We unpacked and did a few necessary things and then collapsed into bed about midnight. And we stayed there. Till about 1o a.m. Sunday morning. There went the plan...I can't remember the last time I slept in on a Sunday, unless I was sick!

Then Monday we were off to one of the most beautiful places in Wisconsin, Green Lake, for a chaplain's convention. Yes, it was for Ken, not me. Yes, I am a pastor not a chaplain, but this year the agenda looked promising--and it was a last chance to hang out by the water. The motel has a nice walking path which winds down by the shore and at one point there is a small sort of dock with a bench that extends out onto the water. I love sitting there with a Bible and a pad of paper, or just daydreaming. 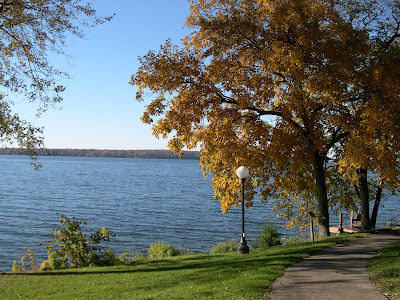 I took this picture as I was heading down to the bench. It was chilly, but too beautiful to stay indoors. 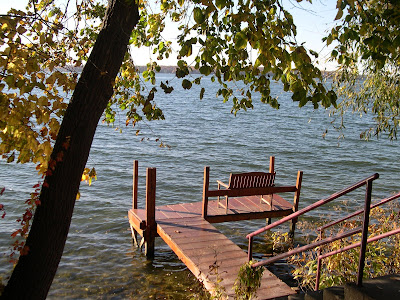 The conference is always attended by an interesting mix of people, mostly from Christian denominations, but there are others present too: a Buddhist monk, two Jewish rabbis (one female) a Muslim, etc.

The primary speaker this year was wonderful. He spoke on the subject of laments--in scripture and in our lives. He eloquently urged us to allow a place for lament--deep sorrow--in life, both ours and others. At first I knew his name Allen Verhey but nothing else, and as I listened I whispered to my husband, "He sound like a professor." Well, I later learned he is a professor of ethics at Duke Divinity School. I may post a few thoughts later as I process what he said, and how it relates to the rest of my sabbatical.

Last Sunday back in the pulpit at Jubilee, I felt a little strange. It should be better this week. I began my sabbatical with a list of questions. I finished with few answers. I'm still seeking the Holy Spirit's direction in many areas. But I do know that God is faithful, and will not leave or forsake me, and that must be enough for now.

And just to show that nice sunsets occur in Wisconsin as well as over the Pacific Ocean, here is the sunset I saw the day after returning home. 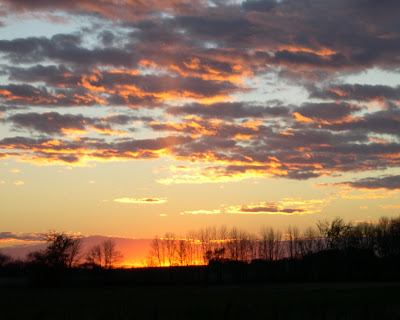 Great photos...I really need to see more of this state but that may not happen for a while.