Third Week of Sabbatical: in Which the Pentecostal Preacher Lady Goes to Evensong and Holy Eucharist at the Episcopal Chapel 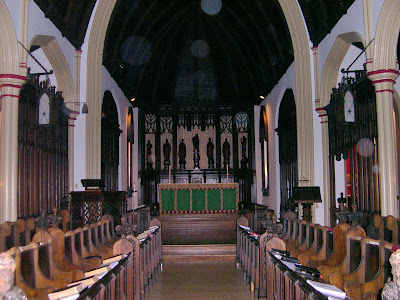 With apologies in advance to any Anglican readers, here is my account of a visit to chapel at the Nashotah House Episcopalian Seminary. The campus is beautiful. Nestled in ancient oaks and other trees are lovely old stone buildings, connected by pathways. The seminary is only about a mile from the retreat center, so one afternoon I decided to attend evensong with one of the other guests who is an Episcopalian priest. We walked to the chapel, arriving early enough to listen to the organist practice.
The chapel is a work of art. The altar is a wonder of carved wood, as is most of the rest of the chapel. There are several stained glass windows. This one is of St. Luke. 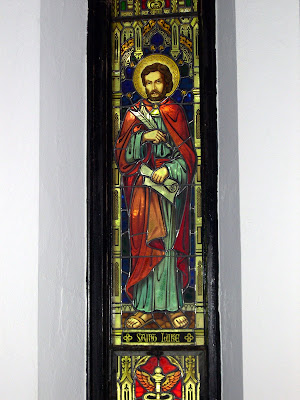 The ringing of an enormous bell called us to worship. The seminarians sit facing each other, perpendicular to the altar in small carved "cubicles." Behind an elaborately carved railing are chairs, placed facing the altar.
I was told beforehand that Nashotah House is the most "Anglo Catholic" of the Episcopal seminaries, so I was prepared for a "high church" experience. The forty or so students processed down the aisle in white cassocks, preceded by their professors who were in full regalia. The liturgy and the Psalm were all chanted. The only spoken part of the service was the scripture readings. I felt blessed to have happened upon the worship service that was sung, as they alternate between sung liturgy and spoken liturgy. I, of course, fumbled with the hymnal and the various portions of the prayerbook--I enjoyed worship more when I just listened.
The atmosphere was serenely peaceful, and as I sat in the beautiful surroundings I relaxed and chanted the parts I knew. At the close of the service I heard flap flap flappity flap flap as the students processed past to the exit. Looking down, I couldn't help but grin at the jeans, bare toes and flip flops peeking out from the hem of a cassock.
Walking back, I asked questions of my fellow retreat guest, like why do almost all Episcopalian churches have red doors (it is symbolic of the blood of Christ and of the fire of the Holy Spirit), which side is the gospel side (right) and which the epistle side (left), and other weighty theological matters. :-) 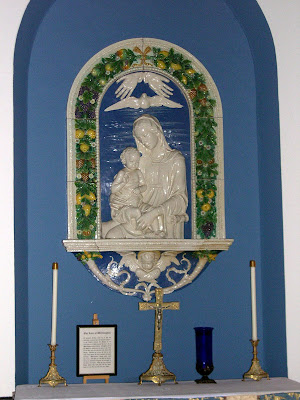 This is a side altar.

A couple of days later I awoke early, so I attended the 8 a.m. Service of Holy Eucharist. This time the student cassocks were black, and the faint aroma of incense filled the air. Something happened to me during that service that I cannot explain.

The presence of God was very real to me, as I again decided to largely forgo the prayer book, except for when the friendly young priest seated behind me helped me out. The mostly male voices singing the Kyrie were so beautiful that tears came to my eyes. And the tears stayed. I found myself quietly weeping through much of the service, and when the elements of bread and wine were blessed I felt a deep sense of wonder. I assumed that I would not be welcome to partake, and a great longing arose in my heart. I was pondering, "Do I just go up anyway, do I stand here and weep and watch others, do I....?" Then the friendly young priest behind me asked if I wanted to share in the eucharist, and when I wondered if it would be acceptable, he asked, "Are you a baptized Christian?" That was it. Such relief....I wondered why it was that I particularly wanted to share the bread and cup on this morning.

I liked the beauty of my surroundings, the reverence, the cassocks and the vestments, the pipe organ, the bell, the chanting, and even the sense of continuity and pattern. I didn't like the division of the chapel (which felt to me like a fence keeping us separated from the seminarians and the priests), the difficulty with knowing what was next, and trying to find the pages fast enough, the awareness that nothing but nothing would alter the form of the service. Even God? Was there room for the Holy Spirit to do something unexpected? I wondered how I would feel if I had never been to church before. Totally confused, wondering what what happening...Still...the presence of God was with me.

At the close of the service, the professors, priests and seminarians processed out, as before. Everyone left. Except me. I sat in the darkened little chapel and the tears fell, and I wondered why.

Posted by Dorcas (aka SingingOwl) at 3:35 PM

Sounds like a pretty amazing encounter. I am reminded of my childhood days in a church filled with wonder and fear of the Lord. Again in my early 20s I was there as I recently remembered. I was drawn to the church and went back the Episcopal Church because it was all I knew and it always felt like a holy place to me. You will probably not be surprised to find out that I got involved in a study group and went for a while as I was seeking the Lord for myself vs. my parent’s views. I miss that atmosphere in so many ways. There is a part of me that will always be drawn to that type of service.

I think we should plan occasional visits to places like that. I know I would not want it all the time, but I understand why there are things you miss. I wonder if there are ways we can combine some of what is best from differing traditions? I've been thinking about that a lot.

You can mix anything. Just the other day I saw someone selling chocolate covered jalepeno peppers. (Note to self, just because they sell it, doesn't mean you have to eat it) it wasn't so good. the pepper part was ok, but the chocolate not so much.

I've experienced this sense of reverence for God's presence, too (in Catholic churches, though). I don't know why, but it doesn't necessarily relate to the magnificence of the surroundings.

My RCIA (Rite of Christian Initiation for Adults) group did a weekend retreat at St. Meinrad's in southern IN in the early '90's. The chapel was quite simple. I remember the mostly male voices. Sadly, because we would not become full members for a few more weeks we were unable to partake of the Eucharistic Communion.

I was baptized and confirmed in the Lutheran Church and many years later, I am still a member of the same parish into which I was baptized and confirmed. While I've attended many other church services of other groups, I love the liturgy of the Lutheran church. It has undergone some transitions since I was confirmed but I am still most comfortable in a church that is heavy with the liturgical format. One thing that HAS changed in our church is that now, children received first communion at about age 9 or 10 - in my day, you didn't get that until you were confirmed and also, our church has the Sacrament (communion) offered to anyone who is a Christian, regardless of church standing or sect. Two changes that I feel bring us forward in time and also in Christ's message of sharing of the faith through bread and wine.

What a wonderful account of the mystery and beauty of a well-done liturgy. Thank you for sharing your reactions and reflections.

As a student at Nashotah House, I thank you for your reflections. Thanks for being honest about both the things that you liked, and the things that challenged you. I pray that you will visit again sometime soon.

M 2 P, I know what you think about some things, but not about trying to combine things....
Thanks for comments, all. I've been thinking about these things for some time, and I don't think I'm done yet.

Ruth, I agree about ritual. Some of it (IMO)is helpful, but I don't want to do it for its own sake. I too love Advent, and we celebrate it, and I still have one of your Advent studies, actually.

Hello Townsend--just surfed over to your blog and then your personal page. :-) How did you happen across The Owl's Song?

Everyone I encountered at Nashotah House was remarkable in their graciousness, from professors to studenst to the staff of the bookstore (where I bought a prayerbook...been wanting a Book of Common Prayer for some time now).

I'd love to visit again soon, though it is not likely that I will be able to do so until my next Cedarly retreat, which can only be every other year. However, they do have a prayer cabin at Cedarly, and if I can reserve it some time, I will most certainly make every effort to visit again. If I do, I'll watch for you.

I love the variety in the worship of the Church. I want to have it all--and I know that is impossible. Well, till Heaven.

I hope that if you visited my church you would feel (though likely at bit out of place, the same as I did) the presence of the Holy Spirit and the warm welcome of God's people.

My dear Pentecostal Preacher Lady:
I am one of the seminarians at Nashotah House and I am so glad that you came to visit. Please do come again and make yourself known (if you are comfortable doing so) I'm certain that we would all be glad to get to know you.
The shuffling of prayer book, hymnal, and psalter is cumbersome to me as well :) I hope that you were not too put out with it. You seem like a lady well familiar with the liturgy, but if you would like to ask any questions about what we do or why we do it, please do not hesitate to write to me at marco00@myway.com.
Just so you know (you probably already know), this type of liturgy is not the norm for Anglicans worldwide. Most Anglican church services worldwide are more like American Pentecostalism than the high church liturgy you experienced.
Again, I am so glad that you came, we are always glad to worship our Lord with a sister in Christ.
-Marcus Emmons

What a beautiful telling of a wonder filled experience!

You ask if, in the formality of the liturgy, can God show up and shake things up? I'd say he did that in spades with you, my dear!

My first experience in a Christian church was attending the weekday mass in an Anglo Catholic parish here in Providence... and while I didn't wind up staying there, I still am deeply drawn to the liturgy. I make my home at a much less formal Episcopal parish... but sure do miss the incense of a high mass!

Blessings on you, my friend

Good point, Rachel. :-)I meant in the order of service--but I get your drift.