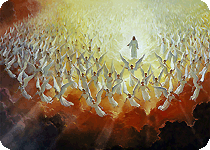 Earlier this week we considered the unseen shadow of the cross that awaited the King of Kings, the Prince of Peace, the One who had come to show us what God is like. This was what befell the Creator at the hands of His creation—an almost unbearable tragedy—what someone once called “a scandalous beauty.” But was it a defeat? Let’s use our imaginations. Let’s take a peek into the throne room of God to see how Heaven’s inhabitants feel about the death suffered by the King of Kings:

From Revelation 5
But one of the elders said...“Do not weep… And I looked, and behold, in the midst of the throne…stood a Lamb as though it had been slain…the four living creatures and the twenty-four elders fell down before the Lamb, each having a harp, and golden bowls full of incense, which are the prayers of the saints. And they sang a new song, saying: “You are worthy to take the scroll, And to open its seals; For You were slain, And have redeemed us to God by Your blood Out of every tribe and tongue and people and nation, and have made us kings and priests to our God; And we shall reign on the earth.”
Then I looked, and I heard the voice of many… thousands...saying with a loud voice:
“ Worthy is the Lamb who was slain
To receive power and riches and wisdom,
And strength and honor and glory and blessing!”
And every creature which is in heaven and on the earth and under the earth and such as are in the sea, and all that are in them, I heard saying:
“ Blessing and honor and glory and power
Be to Him who sits on the throne,
And to the Lamb, forever and ever!”
Prayer: Glorious Christ Child who became the Lamb of God, I join the hosts of heaven in giving you worship and honor and praise! Hallelujah!
Posted by Dorcas (aka SingingOwl) at 1:32 AM

I am praying in agreement with you. Only he is worthy.

My daily reading for the past few days is from Revelation. Not an easy book to muddle through, but some things really stand out, as you have shown.