Church Night With the Bucks

This is also lifted from "Ordinary Time." It is the last time I'll do that--but I wanted to share the pictures! :-D

The earth is the LORD's, and everything in it.
The world and all its people belong to him.

For he laid the earth's foundation on the seas
and built it on the ocean depths.

Who may climb the mountain of the LORD?
Who may stand in his holy place?
Only those whose hands and hearts are pure,
who do not worship idols and never tell lies.

They will receive the LORD's blessing
and have right standing with God their savior.
They alone may enter God's presence
and worship the God of Israel.

Who is the King of glory?
The LORD, strong and mighty,
the LORD, invincible in battle. 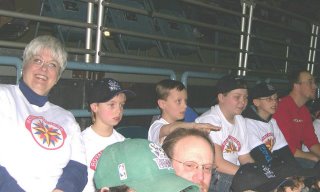 Last night was “Church Night with the Bucks.” The Milwaukee Bucks,that is. I accompanied a group of small boys and their adult leaders to a National Basketball Association (NBA) game. The boys, and a few of the adults, had anticipated this trip for weeks, saving money for souvenirs, discussing their favorite players, and generally bringing the tenor or anticipation to a fever pitch. As they entered the church before leaving for the game, the excitement was evident. After a rather lengthy wait as we drove our van to Milwaukee, we arrived at the sports arena.

We saw others arrive from many neighboring areas. Bright shirts identified many of the boys as church kids. Shouts of recognition rang out as boys recognized friends. We entered the large building and headed up the escalator. Our senses were already on overload as our noses smelled the scent of popcorn and cheese nachos, our ears pulsed with the exciting, loud music, our eyes took in the bright spotlights, flashing scoreboard, prancing cheerleaders, revolving neon and more.

By the time we reached our seats the boys were bouncing with anticipation. An air of excitement filled the place as more and more people arrived. And the shouting was intense when the Bucks were introduced. WooHoo! Little Joey in the seat next to me waved his pennant with reckless enthusiasm and then leaned over, eyes wide and wearing an ear-to-ear grin. “I’m all about the Bucks!” he proclaimed with joy. “I’m so excited!”

I couldn’t help but think of Psalm 24 and, for just a moment, contrast their joy and anticipation as they welcomed their heroes into the stadium with the joy we will express when our King of Glory enters! They leaped to their feet, shouted, clapped, and slapped each other on the back. 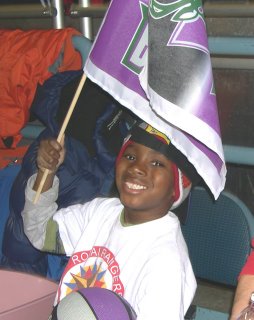 They planned, anticipated, saw others dressed as they were, entered the place of “glory” and cheered their heads off. The parallels are obvious, aren’t they? It was energizing and joyful. I had a great time, actually.

Our reading for today, is a splendid song of worship. I believe this Psalm refers to the solemn bringing in of the ark into the tent David pitched for it, or the temple Solomon built for it. Can you picture the scene as the people of God shout, clap their hands, and sing with abandon?

Perhaps it is a foreshadowing of the rejoicing heard in Heaven itself when the King of Glory, the risen and now ascended Christ, enters in triumph.

Now that is an amazing event to try to imagine! in the Book of Revelation, the writer uses numerous metaphors when describing Heaven. Light, walls of jewels, gates of pearl, a river of crystal, gold streets…I’m sure all these earthly things pale in the revelation of the Heavenly realities, but it is the best John can do.

The angles, faithful servants of God, the cherubim and seraphim, mighty Michael, Gabriel with his trumpet--who knows how many throngs of beautiful beings, row upon row, all rejoicing as only angels could do, perhaps singing and playing music that our loveliest symphonies only hint at.

Into this comes the KING OF GLORY, the Lord of all the watching angelic hosts, victorious over death and Hell and the grave.

Now that is sensory overload!

The angels were to worship him. In Heb 1:6: they ask with wonder, “Who is he?” It is answered that he is strong and mighty; mighty in battle to save his people, and to subdue his and their enemies.

And we, beloved ones, are part of this very place of celebration. Wonder of wonders, Christ has entered into the spirits of his creation, men and women, by his word and Spirit, that they may be his temples.

“Behold, he stands at the door, and knocks.” Rev 3:20. The gates, the very doors of our spiritual hearts are to be opened to him. We are his possession, and he is the rightful owner.

Could this also speak of his second coming with glorious power? Can you imagine a time when we ascend the hill of the Lord? When we stand in his holy place? David said in another Psalm, “Lord, if you marked our transgressions, who could stand?”

Could we be “all about Jesus? Could we open wide the gates of our hearts? Could we anticipate his entrance with abandon and joy?

Prayer: Lord, open the everlasting door of our souls by your wonderful grace, that we may now receive you, and be wholly yours, and that, at last, we may be numbered with the hosts of those who even now adore you in Heaven.

Posted by Dorcas (aka SingingOwl) at 2:00 PM

Back to the concession stands for a moment...do they have the same brats they do at Brewers games?

you can't just gloss over something important like that.