If you have not read the previous "Silver Cliff" posts below, you might want to read them first, especially Part II..

Mark 10:15-17
I assure you, anyone who doesn't have their kind of faith will never get into the Kingdom of God." Then he took the children into his arms and placed his hands on their heads and blessed them. 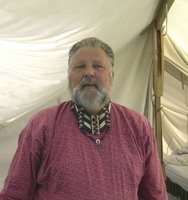 Sunday dawned clear and beautiful. Here is the conversation inside our lodge.

Bearded Eagle: This choker has a cross on it, so would it be good for church? Does it match my shirt okay? Where is my Bible?

Singing Owl: You look fine! I can't find my chemise...maybe I should dress in my beaded Indian dress instead? What am I thinking? Why did I say I'd baptize a baby?

People gathered on the grassy center of camp. Some brought benches or chairs. Some sat on the grass. This picture looks like it should be called "the children's section." 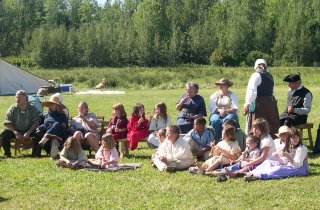 I led us in prayer and in singing "Amazing Grace." Something was already happening. People had tears in their eyes, and there was a quiet sense of anticipation.
We've done church at rendezvous before, but this time was different. Almost everyone in the encampment showed up, which is phenomenal. Rendezvousers are more know for alcohol consumption then church attendance

Ken's sermon was "Jesus Will Meet You Where You Are" from the passage about Jesus and the disciples on the shore after the resurrection. He spoke eloquently about the different places we find ourselves, and how the Lord will come to us in that place of need. More tears. One girl was openly weeping, and I could tell that the man seated next to me was struggling with some deep emotions.
I prayed!

Mother, Father and about-to-be-baptized Child were seated in the front row. 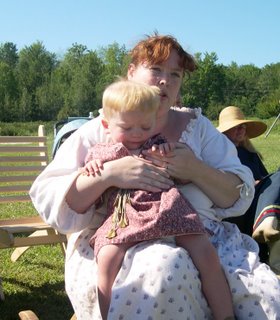 Ken concluded with a time of silent reflection and prayer, allowing each of us to talk to God about our current situations and to invite the Lord into them.

It turned out the man who had spoken to me about baptizing a child was the little boy's grandfather. Here we are: me (looking like Old Mother Hubbard), grandfather, grandmother, sister, mother and toddler. And in the second photo, dad has stepped up, his hair still very short from his recent stint in the Middle East. 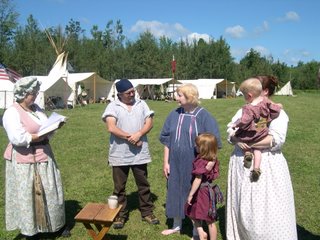 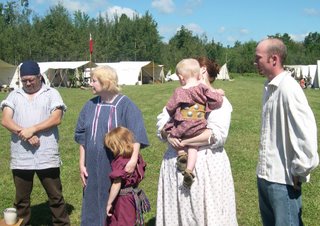 People were invited to stay for the baptism if they wished, and everyone did. It was a beautiful scene. The sky was bright blue; the sun warmed our backs as we sat in the green clearing. I was nervous (will I do this right?) and I was feeling a little strange about doing something I never thought I'd be doing. And this may sound odd, but I did have a sense of God smiling at us, maybe even chuckling at my discomfort. Does God chuckle? Perhaps.

Look closely at the group picture and you will see a piece of pottery on the table. It is a little creamer pitcher-- very suitable for baptisms of the "pouring " variety, I thought.

From the Old Testament I read scripture about our responsibility to share the works of God with our children and grandchildren. From the New Testament I read about Jesus blessing the children. We prayed for the family and for little Ethan, who has some disabilities. I led them in statements of intention, and I asked those assembled to do nothing that would hinder the work of God in this little one's life.

The words of baptism, "I baptize you in the name of the Father and of the Son and of the Holy Spirit" felt strange in my mouth as I poured a stream of water over little Ethan's head. He winced. God smiled.

As people began to disperse, the man who had sat next to me told me that he was a Christian who had once been strong in his faith. He said he had not been in church for over a year and he had been questioning God's existence. He went on to say that his wife had left him and their two teenagers, and he had left church and God behind at the same time--struggling through the pain of divorce and feeling estranged from God--very angry. He said, "This was so beautiful, and it was just what I needed. I would not have gone to a church building, but this seemed all right. I know God was speaking to me and is going to meet me where I am." I told him I'd be praying for him and trusting that his journey back to faith would be something he could share with others in days to come.

Later, Grandfather approached with another of his several grandchildren. His voice was uncharacteristicly soft as he thanked me for baptizing his little grandson, and he handed me this little pottery vase. The buckskin-clad boy who stood by his side looked up at me shyly as he told me he had picked the Goldenrod himself. A $20 bill was tucked inside the vase. I think this little vase will stay with me long after my chemise and Ken's choker are dim memories. 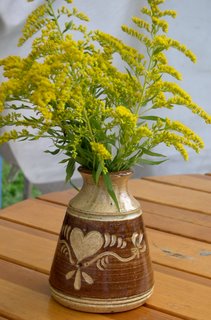 Praise be to God, who does all things well.

What a special baptism for that little boy!

Oh, my sister Singing Owl! Oh, geez! This is one of those "just don't talk about it" topics for me on those lists we're on. I cannot tell you the depth of holiness I've been privileged to share in when I baptized little ones...and now, I don't have to. You know!

I'm sitting here in the church office boo-hooing with joy over your story. Not that you've "come over" to some other paedobaptism "side," but because you dared to obey God's leading in these special circumstances, despite all the "right" reasons not to say yes to the family.

Oh, heavens...I don't know how to say what I'm thinking/feeling right now...but you have one very joyful friend here in Texas right now! You're a remarkable servant of God, dear one.

p.s. Want me to send you a hard copy of that anthem?

You know, coming from both a Baptist and a Methodist background, I can relate to both sides. I always saw the baby baptism in the Methodist church as more of a dedication ceremony than anything else. And, when the child is older, they can always decide to be baptized again if they change to a faith that believes differently.

The important thing is that you listened to God and obeyed Him. There is always a reason for those messages He gives us, and I'm so glad you were able to discern His leading in this and to obey. Your posts blessed me!

Much love to the Owl clan.
Nightmare

What a beautiful story, ma'am. We miss so much of Jesus when we tie Him up in a doctrinal box. It is so refreshing to hear someone speak of hearing that "inner voice" and walking in obedience....

Excuse me while I go wipe the tears from my eyes...

That you would do what you were called by God to do over what man tells you is right to do puts you on my most respected preacher list, woman. Way to be a follower of Christ!

I'd like to say something here, but can't really find anything worth wasting the words. In any case, this was a great story - thank you for sharing it!

Hope you mom is getting better.

What a wonderful story! Obedience CAN drag us into parts unknown... but God always walks with us when he asks us to step out, doesn't he?

Well, blessings to all of you dear people! I appreciate your affirmation.

Psalmist, on Saturday night I actually was remembering your beautiful anthem and wishing I had it with me. But since, as you allude to, I haven't "switched sides" I doubt this will happen again.

About 10 or 11 years ago when I dispaired of ever finding a congregation that would allow me to pastor them, I considered sending a resume to a nearby Methodist church. It would have been a nice fit in some ways. What stopped me was precisely this baptism issue.

Silly, maybe. Will we discuss this in Heaven someday? Probably not. We won't care.

Meanwhile, I am glad I obeyed. Something happened in the people there that perhaps would not have happened otherwise. And something was happening in Ken too. And the baptism was yet to come.

FWIW, I did exactly one immersion baptism (a teen girl), and two other adult/youth baptisms in my four years "in harness." Tell you what, baptizing babies is WAAAAAY easier than immersing teens! I kind of chuckled reading your description of the nerves about doing it right! I felt the same way when getting ready to do the girl's baptism--at our neighbor AG church, btw--and feared I'd mess up and drop her or something. I was VERY glad she wasn't a big strapping young guy!

Amen on mystery. Not comfy, but then, what good would a god be who could be fully understood? Heavens, I can't even come close to fully understanding myself!

Still praying for all of you, especially your mom and you right now.

I love you. Someday we are going to meet in person.

Thanks so much for the prayers, Psalmist and Ruthie and Q.P. and everyone else--I thank God for you all. Today was a tough day.