On Saturday we accompanied our men into the woods to attempt a rescue of Miss Rebekah McClue.

It had rained earlier, but now the sun shone through the green ceiling of trees, casting shifting patterns of light and shadow. The leaves shook small showers of droplets onto our heads. It was quiet in the woods (except for us, being silly) and it was not hard to imagine a little of what it was like for Native Americans, Mountain Men or Voyaguers to pad softly through the woods with moccasined feet.

According to the scenario, Miss McC. the daughter of a prominent settler in the area, had been abducted by "hostiles." A "woods walk," as this is called, requires everyone to keep a sharp eye out for various targets, pop-ups, and other surprises. The situation may call for a black powder rifle or for a tomahawk. Some woods walks involve archery but this one did not.

No, we really are not violent people. 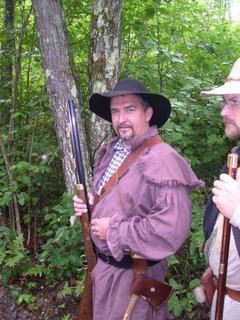 Much2Ponder looks like Peter Pan to me in this picture. (Really, I'm just saying that because I am coveting her buckskin dress.) 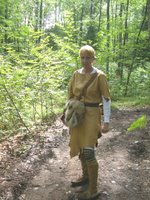 Her husband, Little Too Much, and Jesse get ready to trek on There is no sign of poor Rebekah yet. 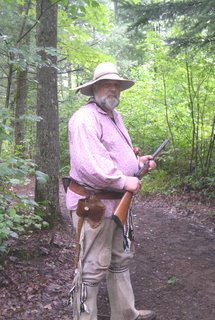 Bearded Eagle has already felled a "bear" with his tomahawk. Here, he keeps a careful lookout as we quietly creep through the woods. 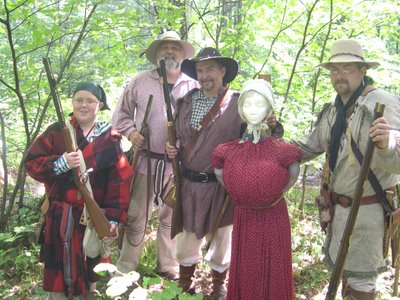 And here they are with Rebekah Mc Clue, who is tied to a post. Jesse's son, Nick, Ken (Bearded Eagle), Ray (Little Too Much) and Jesse. Pat (Much2Ponder) says she thinks that Rebekah and I are related since we share a specific physical resemblence. I do not know what she means.

Posted by Dorcas (aka SingingOwl) at 8:25 PM