My sweet sister looked cute on the beach in her big hat. Her husband is beside her. 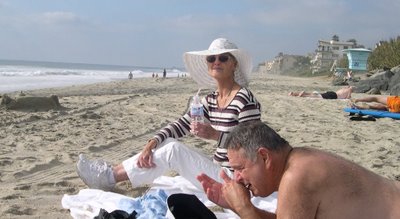 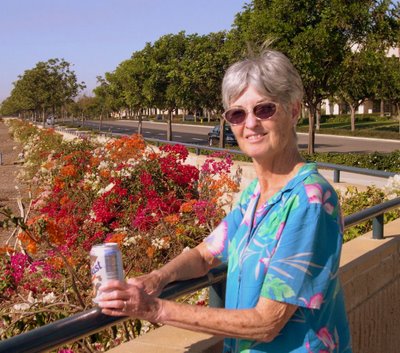 She looks the same, just older. Her laugh is the same, and the tone of her voice. It is disconcerting, because I half expected her to snap out of it and be her old self at any moment. As she and I walked, she stopped to show me these sprawling flowers and began to do something we have always done as a joke with each other. She started speaking with an accent--this time it was Chinese. I was surprised she could still do that so well, and she looked at me with a grin. The fact that nothing she was saying made any sense brought tears to my eyes. At one point she gazed at me and asked clearly, "Am I irritating?" Ken came up at that point and she kept talking to him in the same accent, only what she said was nonsense. "Come on, Hop Sing," he said, grinning as he guided her towards the stairway. She laughed and said, "Not everyone understands my accent." Then suddenly she looked at both of us blankly, with total lack of recognition. So strange and sad. Later I tried to explain that I was about to be a grandmother since Kris was expecting a little girl. She did not understand at all, and somehow kept thinking we were talking about puppies. 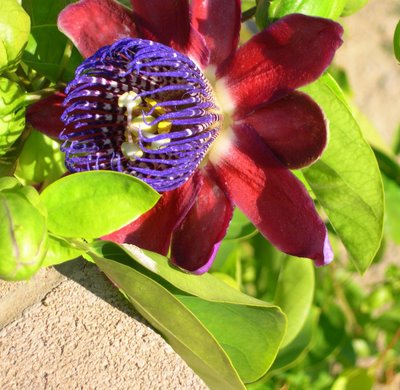 I forgot to post this with the flowers. It is a Passion Flower. Isn't it amazing? I think it looks alien. ( Ever seen "Little Shop of Horrors?") The wall was covered with buds, but this is the only one that was open. It was about the size of my hand.

Thank you for chronicling your journey out west! What a beautiful, and other-worldy looking, flower!

I'm so sorry about your sister. I can't imagine how hard this all must be for you.

I love this series, though. It just rings of life - the good, the bad, and the marvelous all rolled up in a day.