...right back where I started from...open up your Golden Gates....

I can hear our high voices clearly in memory. After a road trip to Texas, my sisters and I would loudly belt out that song as we rattled over the suspension bridge that crossed the Colorado River, or as we approached a border check point that signaled we were almost back home. The check points were designed to keeep products that might harbor pests from entering California from Mexico or other states. If one was unfortunate, suitcases came out of the trunk and were opened and inspected. If it was a busy day we might simply be asked, "Are you bringing any produce from out-of-state?" We once had to turn over a bag of delicious cherries. I could just picture the border staff smacking their lips over our lovely fruit after we drove on.

Almost fifty years later, I guess it is safe to admit that I once sneaked a cotton boll from Texas across by covering it with maps in the glove compartment. I brought it to show-and-tell when school started in fall.

The picture of the poppies was taken by someone in springtime. We won't see this, but I like the picture. I was about seven years old when my family took an all-too-rare trip and ended up driving to the poppy fields. I was enchanted by the acres of poppies and blue lupines. I lay down in them and gazed at the bright blue sky, feeling as if I had gone to Heaven.

We will spend a day in Carlsbad, on the Pacific coast near San Diego, and then we will make a long car trip to Bakersfield. Bakersfield is famous for country music because of all the "greats" who were either born there or spent lots of time there. I hear that Buck Owens' restaurant is not to be missed. I just remember Bakersfield as a rather dirty desert town with little to recommend it. No offense to any Bakersfield folk who may stumble across this blog. I will be happy to be wrong and to discover that Bakersfield has morphed into the jewel of California. 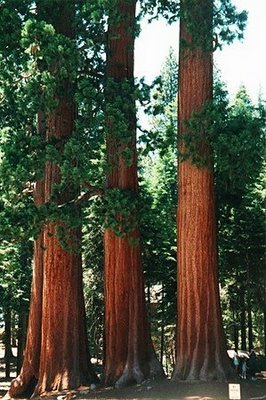 This is what I really want to see most--some of the giant trees to be found in the mountains of Sequoia National Forest. It is not too far from Bakersfield, so hopefully we can make it. Some of the happiest days of my life were spent there. I can smell the pine needles, see the enormous pine cones, recall standing at the base of one of these amazing trees and looking up, up, up, till I grew dizzy. Many were growing before Jesus' birth! Our family once played an impromptu game of "softball" using a foot-long pine cone as the ball and a branch from a fir tree as the bat. The game ceased when my sister got whacked by the "ball" and ended up with a bleeding leg. Those pine cones had sharp edges.

I'll be back in a week. This is not going to be an easy trip, but I hope it will be an enjoyable one nonetheless. There is something for my spirit in this return to the state of my birth.

Posted by Dorcas (aka SingingOwl) at 2:49 PM

Have a good trip.

Could we work out a six month pulpit swap? You seem to be traveling once every six weeks.

Ha! I know. It really isn't every six weeks...and sad to say, none of this running around has actually been a vacation! Dang it!

I pray that your visit will be positively nostalgic and that you will be renewed in your soul by all the strengthening things of your past. Our good God can use all kinds of memories and fresh experiences to renew your strength in this visit. I pray that you will return refreshed with a clearer vision of how our Lord is wanting to use you within the body of Christ. May you be invigorated bodily as well as spiritually from this trip Dorcas, love, Maureen

Welcome home! I hope it was a refreshing trip in every way.
All of your pictures remind me of the years we lived in California, especially the poppies!

something for your spirit .. wonderful :)