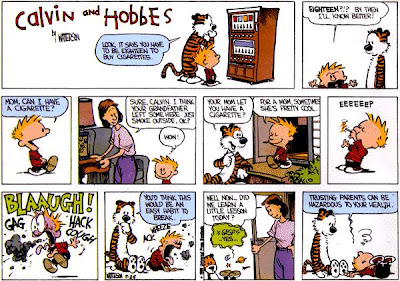 Presbyterian Gal says, "After an exhausting election here in the states it's time for some spirit lifting! Join me with a nice cup of tea or coffee or cocoa and let's sit back and read the Funny Papers!"

1. What was your favorite comic strip as a child?

Little Lulu. Yeah, I'm getting old. Anyone else remember her? I also like Archie and Veronica and Betty and Jughead, etc. But not so much the strip. More the comic books.

2. Which comic strip today most consistently tickles your funny bone?

Hagar the Horrible. It would be the late, great, Calvin and Hobbes if it still existed.

3. Which Peanuts character is closest to being you?

Linus. I don't have a blanket, but otherwise...I'm a hopeless idealist and all that. And Linus once said, "I love mankind. It's people I can't stand!" That made me laugh out loud.

4. Some say that comic strips have replaced philosophy as a paying job, so to speak. Does this ring true with you?

Hmmm....never heard that said, but yes I suppose it does, to a point.

5. What do you think the appeal is for the really long running comic strips like Blondie, Family Circus, Dennis the Menace as some examples?

Bonus question: Which discontinued comic strip would you like to see back in print?

Ah, said it. Calvin and Hobbes without a doubt. Now there was some philosophy!
Posted by Dorcas (aka SingingOwl) at 8:40 AM

I remember L'il Lulu! And Richie Rich. I used to buy up the Archie and Veronica comics as fast as they came out! If only I'd hung onto them for now, they'd make up what's been lost in my 401K.

Wow, speaking of cats, I loved the B. Kliban cat cartoons -- again generally single panel. And of course I remember Little Lulu, and those comic books. At some point in my son's childhood I learned that Archie and Jughead had been taken over by some sort of public health organization for teaching purposes. Sad day.

Yes. Calvin and Hobbes rocks. And also Kliban. Our first kitty was named after his trademark grey tabby... all he needed was red sneakers!

I forgot completely about Little Lulu. I bought her comic books, too.

I grew up with Archie comic books, and enjoyed Calvin and Hobbes as well.