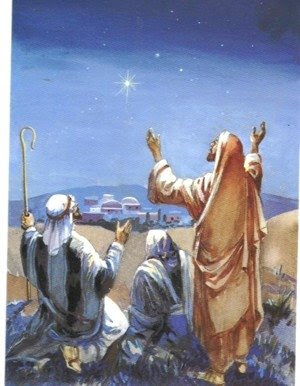 Luke 2:8-20 (NLT)
That night there were shepherds staying in the fields nearby, guarding their flocks of sheep. 9 Suddenly, an angel of the Lord appeared among them, and the radiance of the Lord’s glory surrounded them. They were terrified, 10 but the angel reassured them. “Don’t be afraid!” he said. “I bring you good news that will bring great joy to all people. 11 The Savior—yes, the Messiah, the Lord—has been born today in Bethlehem, the city of David! 12 And you will recognize him by this sign: You will find a baby wrapped snugly in strips of cloth, lying in a manger.”
13 Suddenly, the angel was joined by a vast host of others—the armies of heaven—praising God and saying,
14 “Glory to God in highest heaven, and peace on earth to those with whom God is pleased.”
15 When the angels had returned to heaven, the shepherds said to each other, “Let’s go to Bethlehem! Let’s see this thing that has happened, which the Lord has told us about.”
16 They hurried to the village and found Mary and Joseph. And there was the baby, lying in the manger. 17 After seeing him, the shepherds told everyone what had happened and what the angel had said to them about this child. 18 All who heard the shepherds’ story were astonished, 19 but Mary kept all these things in her heart and thought about them often. 20 The shepherds went back to their flocks, glorifying and praising God for all they had heard and seen. It was just as the angel had told them.

Are you wondering what the theme of “peace” has to do with advancing God’s Kingdom?
My grandparents endured World War I (the “war to end all wars”) and my parents’ generation has vivid memories of World War II. During the war my father worked at Lockheed Aircraft designing military aircraft. Later, during the “cold war” of the late 50s and beyond, he worked behind what Lockheed employees dubbed “the iron curtain”—not the Russian one—the invisible but very real one which meant only workers with sufficient clearance were allowed to see plans of super-sonic spy planes. My dad used to tell us that he was making “baby buggy bumpers.”
There was an air of fear in those days of drills--when we crawled under our desks and covered our heads—as if that posture would have saved us from a Russian-sent atomic bomb! I remember seeing the three-triangle signs that popped up everywhere noting that a certain building was a shelter in case of nuclear attack.
There was the Korean war, and then the war that still scars our American psyche, the ill-fated Viet Nam conflict. Now there is war in the Middle East, fears of terrorism, and a world continually full of violence, war and rumors of war. I recall a line from a popular Christian song of the 70s, the era of peace accords. “There will never be any peace until God is seated at the conference table.”
While Christians can and should work for peace in many ways, we know that all efforts at lasting peace will ultimately fail unless the Lord rules in our hearts and in our world.
Peace on earth? Yes, Jesus was the one Isaiah had called “the Prince of Peace.” Angels proclaimed his birth and sang of God’s peace on earth, and just as surely as he came to earth the first time, he will come once again to rule forever. We are given the message now, the message of peace that goes far beyond what can be found in this world. Jesus can bring peace to troubled hearts.
Jesus said, “I am leaving you with a gift—peace of mind and heart. And the peace I give is a gift the world cannot give. So don’t be troubled or afraid.” (John 14:27). That is the “good news” of God’s Kingdom. Let’s share it with those we meet. As we do, God’s Kingdom of Peace advances.

Prayer: Prince of Peace, help me to trust you with my fears and concerns. As you give me peace, help me to be bold in sharing it with my world. Amen
Posted by Dorcas (aka SingingOwl) at 5:01 AM

Amen to that SO. Peace as only can be found in knowing him and allowing him to work things out in our lives...is much needed. This was a good and thoughtful post. Thank you and I miss you.

Just remembered you have a New Years wedding coming up so you won't be able to go alone with us, but that's ok...God knows. He is good and faithful. Hope this finds you in joyful spirits and filled with peace as only Jesus can bring.